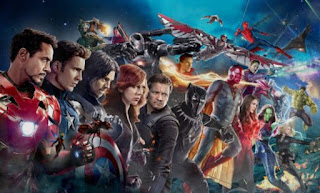 If you've been reading my blog since January, you've noticed that I've been taking a look back at all the Marvel Cinematic Universe movies. This is all a build up to "Avengers: Infinity War" which will be a conclusion and an accumulation of several story threads playing out across the franchise. I've been such a big fan of this franchise that it inspired me to write this big piece.

What started as a one movie per week has changed slightly. And its not entirely my fault. Marvel Studios moved the release of "Avengers: Infinity War" to April 27th instead of May. So now, I don't have as much time to watch everything. But don't worry, I rewatch everything in time. Whether its two or three movies a week, I'll get it done.

Oh and I gave it a slight name-change, Marvel hardcore fans will like it.

Here is the series so far: Enjoy.

Guardians of the Galaxy

I'll be updating this regularly! So check back periodically!
Posted by Shawn Hoelscher at 7:57 PM