Review: "Red Sparrow" is a brilliant showcase for J-Law, but a slow sludge through the spy game. 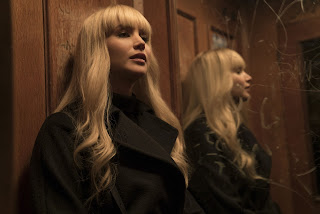 When I was student teaching social studies to 8th graders in 2012, I showed them the trailer for "Zero Dark Thirty" and I think I surprised them when I discussed what actual spy life is like compared to how its romanticized in films with James Bond, Jason Bourne and Ethan Hunt. There aren't spies really going around blowing stuff up all the time. Although I have to admit that I was a little surprised by the gadgets that retired CIA operatives discussed. A grounded spy film doesn't happen very often, and I wonder what people make of them. If you are expecting an action film with Jennifer Lawrence as a seductive spy in "Red Sparrow," you are going to be sorely mistaken. Sorry to say.

Jennifer Lawrence seems to be making a career playing people who get tangled up in someone else's game, and how she has to push in a subtle manner just to survive. Sometimes, we hold it against actresses who become typecast actors, but sometimes that happens without even noticing it. It feels like Jennifer Lawrence was destined to be in "Red Sparrow" and she sure throws herself at the role. Again, this isn't spy "Hunger Games." This is a slow burn. It's a tightly paced drama about a woman who is pulled into the world of the spy game, and she either needs to become a master player in this espionage game or die.

Lawrence plays Dominika, a Russian ballerina dancer who is really good at what she does, and it has given her a nice life. It includes giving healthcare to her mother (Joely Richardson). One day, she has a freak accident, and she's recruited by her Uncle Ivan (Matthew Schoenaerts) into Sparrow School. The school is a secret Soviet spy institution that trains its agents seemingly in the arts of seduction. Dominika quickly learns the power of her body, and what she can get out of it. It's certainly a bold choice in 2018, a movie about a woman struggling that the only thing she will be good for lies between her legs, and how she needs a way out. Lawrence is brutalized in some profoundly ugly ways in this movie, and if your squirmish about sexual assault, you should do yourself a favor and skip this one. This is uglier than anything that happened to her in last year's "mother!" She makes some big choices in this movie, Lawrence certainly runs with it, but not without a tinge of "J-Law" in her work here.

Dominika's eventual way out comes in the form of Nate Nash (Joel Edgerton) a CIA operative who is planting a mole within the Russian intelligence world. He wants to turn Dominika to their side, his superiors doesn't believe he can. What drives much of the middle of the film is how these two play their little cat-and-mouse game. There is a genuine struggle between what is real and what is part of the game. It's certainly nothing new in this genre, but Edgerton and Lawrence do what they can to make this stick. Sadly, the CIA is so painfully thin, as written at least, that it ends up being a bore. It's all simple rhetoric that feels like it was recycled from other films' scripts. It's too bad, because they got some good actors like Mary Louise-Parker and Sakina Jaffrey but I think their characters could have been much better realized.

Some of the most harrowing content in the film takes place at the Sparrow School. Charlotte Rampling plays a terrible woman in this film, just fucking terrible. Consider a scene where Dominika is forced to show her how she's honed in her seduction technique to a fellow male Sparrow who nearly raped her in the shower. Either that or she's kicked out of the school completely. Charlotte plays it all straight, never tipping into something that feels fake or like a cartoon. She has some very good material in the film that I feel is strong. It could have been throw-away material, and she certainly makes it shine.

"Red Sparrow" is a very long film, and some might feel like it moves at a snails face. I will even admit that while I was fairly engaged, even I was reeling for the clock at moments in the film. If you need your movies to move at a fast pace, this isn't going to be for you. A former CIA agent said that the movie plays it real as far as spy life is concerned, and I always dig authenticity. I was engaged by the performances and the story and the ideas of the movie. So, I found it rather disappointing that the movie goes for the predictable ending right before the credits. The revelation of the mole and the decisions Dominika makes in the end are telegraphed thanks to all the other spy movies that have been made. I had to laugh when I learned that film critics were forced into secrecy when discussing spoilers for the film, since nothing groundbreaking happens at the end. It's a fairly straightforward ending, which kind of stinks after so much build up.

While your watching the movie, see if you can guess the time period. For much of the film, I thought this was a Cold War movie. Then for a little longer I thought it might be late 1980's. I almost thought I was the victim of a prank when I found out that the movie takes place in present day. There is very little evidence given regarding the time of the movie, and its certainly distracting.

I have to say that I preferred this to last year's "Atomic Blonde." This is a movie that feels more dangerous and it takes you away from the norm that we usually get in the spy genre. Anybody expecting a female James Bond movie will leave the theater frustrated. Something different was made here and if you go in with an open mind, you may enjoy yourself. I think it gets away from the filmmakers at the end and it feels like a great movie slipped away. But the pros powerfully outweigh the cons here, and this is an enjoyable film.

FINAL GRADE: B
Posted by Shawn Hoelscher at 9:52 PM