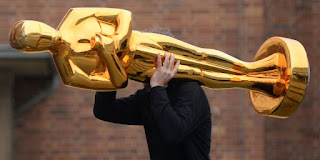 It's that time of year again, the big night for anybody even remotely working in Hollywood. The biggest night for those who write about all things film too. It's the big one, the Oscars. As always, I make predictions on who I believe will end up taking the gold home. Prior to last year, I got dangerously close to getting a perfect ballot. Last year? Not so much, if you remember. I certainly hope I haven't lost my touch. Before I've relied on my gut for most predictions, and some semi- research on categories I could never judge. So hopefully, the odds will be in my favor this year.

I heard on the radio this week that the Academy is really going to push for a more cinema oriented ceremony tomorrow night. So apparently, don't expect very much actor grand-standing. Don't expect many undisclosed plunges into politics. The damage may already be done in that department, but we'll see I guess. We shall see.

BEST PICTURE “Call Me By Your Name” “Darkest Hour” “Dunkirk” “Phantom Thread” “Get Out” “Lady Bird” “The Post” “The Shape of Water” “Three Billboards Outside Ebbing, Missouri”

WHO WILL WIN: "The Shape of Water"
WHO COULD WIN: "The Three Billboards Outside Ebbing, Missouri"
DARKHORSE: "Get Out," "Lady Bird," or "Call Me By Your Name"

This category gets harder and harder are predict. Especially since its not certain that the big, obvious choice gets the win. The last two years, The Academy has given the award to smaller, independent fair. While I appreciate that the Academy represents smaller films, it totally kills prediction pools. I wouldn't be surprised at all if something like "Lady Bird" or "Call Me By Your Name" gets the win tomorrow. With the social intrigue that has been a big part of the year this year, I could totally see "Get Out" winning this as well. But I have to go with "The Shape of Water." There are never too many years where a movie I am overly passionate about is up for this award, and actually has a serious shot winning. "Three Billboards" has also been very popular on the award circuit too, and could take this. Still, I am officially holding out for "The Shape of Water" to win best picture.

So while there is a small chance that Christopher Nolan could win it, I truly think that Guillermo del Toro will be receiving the top honor this year.

Had "Phantom Thread" come out earlier than it did and if P.T. Anderson advertised in Daniel's behalf, I am sure that Daniel Day-Lewis would be winning his third Oscar in twenty years, but Gary Oldman has been getting some serious acclaim for his work. He's also very well liked. I am thinking he definitely gets it tomorrow.

WHO WILL WIN: Frances McDormand
WHO COULD WIN: Sally Hawkins or Saoirse Ronan
DARKHORSE: Meryl Streep

There is always a small percentage of probability that Meryl Streep walks away with the award, but like most years, I am sure she got nominated just because she somehow got the whole business to kiss her ass at all times. "The Shape of Water" has been so well liked during this years award circuit that Sally Hawkins could upset here, but I think that this year will belong to Frances, she certainly deserves it.

WHO WILL WIN: Sam Rockwell
WHO COULD WIN: Willem Dafoe
DARKHORSE: Woody Harrelson

"The Florida Project" was my favorite film of last year, and I really can't fathom why he went so under represented in this years award circuit. Willem Dafoe could very well upset here, but I don't think there is a single Earth in the entire multiverse where Sam Rockwell doesn't win tomorrow night.

WHO WILL WIN: Allison Janney
WHO COULD WIN: Laurie Metcalf
DARKHORSE: N/A

I don't think there is any other competition besides these two, it will come down between Allison Janney and Laurie Metcalf. In fact, I don't know if I picked the right person, I am so on the fence between these two that I could scream. But Janney has been very popular, and she's won lots of awards already. Will that get her the biggest award of them all?

WHO WILL WIN: Lee Smith
WHO COULD WIN: Machliss and Amos
DARKHORSE: n/a

"Dunkirk" was pretty much the best edited film of last year, and the only other movie that came close was "Baby Driver."

WHO WILL WIN: Roger Deakins
WHO COULD WIN: Dan Laustsen
DARKHORSE: n/a

Yes, "Blade Runner 2049" wasn't very popular at the box office, but the critics stood up for it and I think that will be enough to garner votes from The Academy. I think the work done by Deakins is undeniable.

WHO WILL WIN: Faces Places
WHO COULD WIN: Icarus
DARKHORSE: Strong Island

Netflix originals really have a good tendency to win at the Academy, but "Icarus" was good enough that it could very well upset this year. But all roads point to "Faces Places" winning it tomorrow.

WHO WILL WIN: A Fantastic Woman
WHO COULD WIN: The Square
DARKHORSE: The Insult

In actuality, it may be "The Square" that is the actual dark horse, which frustrates me beyond belief. "The Square" was without a doubt, one of the very best films of last year, and I can't believe its win tomorrow isn't a sure thing. All I have to say is "A Fantastic Woman" better be fantastic whenever I get a chance to see it, because its been talked up very much already.

WHO WILL WIN: Alexandre Desplat
WHO COULD WIN: Jonny Greenwood
DARKHORSE: Hans Zimmer or John Williams

I really think that Alexandre Desplat wins no matter what.

ORIGINAL SONG “Mighty River” from “Mudbound,” Mary J. Blige “Mystery of Love” from “Call Me by Your Name,” Sufjan Stevens “Remember Me” from “Coco,” Kristen Anderson-Lopez, Robert Lopez “Stand Up for Something” from “Marshall,” Diane Warren, Common “This Is Me” from “The Greatest Showman,” Benj Pasek, Justin Paul

WHO WILL WIN: "Remember Me"
WHO COULD WIN: "This Is Me"
DARKHORSE: N/A

Between these two, there is no middle ground, its either going to be the representatives from "Coco" or "The Greatest Showman" getting this tomorrow. To be honest, I think "Coco" has the best chance at winning tomorrow. "Coco" was no doubt the bigger hit of the two, and yes that does make a difference. Yes, there has been some acclaim for "The Greatest Showman" has appeared more or less, its "Coco" that I think will strike gold tomorrow.

WHO WILL WIN: The Shape of Water
WHO COULD WIN: Blade Runner 2049
DARKHORSE: Dunkirk

While the production design was pretty marvelous in the "Blade Runner" sequel, I think the edge will go to "Shape of Water."

WHO WILL WIN: Phantom Thread
WHO COULD WIN: Victoria and Abdul
DARKHORSE: Beauty and the Beast

If "Phantom Thread" wins for anything tomorrow, it will without a doubt be for its amazing costume design. There are some big maybes in this category, and those maybes could be wins, but I doubt it.

WHO WILL WIN: War of the Planet of the Apes
WHO COULD WIN: Blade Runner 2049
DARKHORSE Guardians of the Galaxy Vol. 2

Yes, the visuals of "Blade Runner 2049" are mesmerizing, but I don't think it wins anything tomorrow besides cinematography. There is a decent chance that "Star Wars" gets it over anybody. I would love for the MCU to win their first Academy Award tomorrow, but I still think that "War of the Planet of the Apes" could win tomorrow. If "Kong: Skull Island" wins I will lose all faith in humanity.

WHO WILL WIN: Dunkirk
WHO COULD WIN: Star Wars
DARKHORSE: Baby Driver

I am calling it for "Dunkirk" in both cases. They are the big picks for the winnings tomorrow and I think it excelled in the best of the categories.

WHO WILL WIN: Darkest Hour
WHO COULD WIN: Wonder
DARKHORSE: Victoria And Abdul

WHO WILL WIN: Jordan Peele
WHO COULD WIN: Greta Gerwig
DARKHORSE: Gordon and Nankani

This is a bit competitive this year, honestly its up in the air. But for tomorrow I am going to give the edge to Jordan Peele. Its really rare that horror movie gets this much recognition in the awards season, they must be ripe to win something, right?

WHO WILL WIN: James Ivory
WHO COULD WIN: Aaron Sorkin
DARKHORSE: Rees & Williams

James Ivory has been writing for a long time, and I think he's going to get it tomorrow, he wrote a lovely screenplay.

WHO WILL WIN: Coco
WHO COULD WIN: no
DARKHORSE: no

I saw little to no short films this year, "Heroin(e) appeared on Netflix, so I will definitely be rooting for that film. So I don't think I have enough information to make a formal decision on those. I may just read who is predicted to win and put my money on that.

Who do you think wins big tomorrow?

Posted by Shawn Hoelscher at 8:39 PM