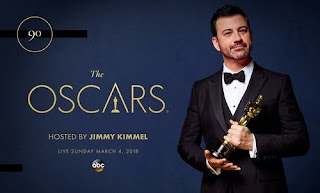 The 90th annual Academy Awards were last night. As always, I made my predictions and posted them here late Saturday night. If you are curious to see what my predictions were, click here! I predicted 19 of the 24 categories correct. I never see any of the short films, but I did good last year seeing one of them! Sadly, the one I saw ended up not winning. I was surprised to see that "Blade Runner 2049" beat out "War of the Planet of the Apes" in Visual Effects. Yes, the look of the future was stunning, but the mo-cap visuals seem to be getting better and better each year. I also messed up on documentary feature, a part of me knew to bet on "Icarus" and now I am kicking myself in the shin right now.

This being the 90th annual Academy Awards, it was a landmark ceremony. I liked that we got so many homages to other films. I love that we got a glimpse of film history. This is the stuff that I live for, I loved looking over the history of film and how it translated in the Oscars. I wish the ceremonies would show more of these types of montages more than anything else. This is supposed to be a celebration of the world of cinema, we need to do a better job of that.

Especially since the ratings weren't so hot last night. Last night's ceremony garnered 25 million viewers, which is the lowest its been since 2008. They are blaming the poor ratings on this and that, because I guess they don't like to admit the true problem. I heard on the radio last week that ABC was going to push for a more entertainment-oriented show instead of a political-oriented show. Sadly, they barely did enough work to pull off that endeavor. Last night's ceremony was another politically charged ceremony. I guess it wasn't as bad as previous years, were literally EVERYBODY had to get in their two cents about EVERYTHING. But still, making things political was definitely a theme of the show. It matters, because drops go down every single time someone brings up politics, the ratings will only go down. Let's make the Oscars both funny and fun again. Jimmy Kimmel was better last year, and I actually couldn't believe how one-note he was last night. The jet ski joke really wasn't that funny to begin with, and you push an unfunny joke all night, it gets daunting. I thought it was ironic how the ceremony started a half hour earlier and Kimmel pushed for shorter acceptance speeches, but then made a stupid detour to a early screening to hand out treats? Sigh, make the Oscars funny again, please. Dragging Faye Dunaway and Warren Betty out to announce best picture wasn't funny, it was lazy.

Sam Rockwell gave the best acceptance speech for the night. The only thing that was missing was a Swingers style dance from beginning to end. Guillermo del Toro has been working hard towards his big wins last night. From "Blade II" to "Hellboy" and from "Pan's Labrynth" to "The Devil's Backbone," he's shown us things no other filmmaker could. It was an honor that was a long time coming. I also had a big smile for Jordan Peele's win for Original Screenplay. Yes, it was a social satire, but it was mainly a horror film. Horror films rarely get any type of recognition at these award shows. So that was a win by itself. I was also kind of hoping that Frances McDormand would be handing out tequila during her speech, but nope. Oh, well.

Everybody seems to be freaking about Tiffany Haddish and Maya Rudolph, but I honestly didn't think they were very funny at all. No, I don't want Haddish and Rudolph to host next year. The Oscars need change, they need some good, well-seasoned comedians to host again. You know why Billy Crystal, Steve Martin and Ellen were so good? Get Alec Baldwin on it next year!
Posted by Shawn Hoelscher at 9:13 PM