Who Played It Best: Pennywise The Dancing Clown 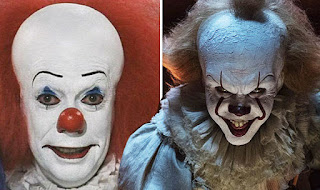 It seems like every one of my columns I've created for this blog have become irregular. I apologize for that. I am the only person to writes on this thing and I absorb so many movies in a given week, and have so many ideas for this blog that I more or less execute successfully. Add in a day job and a personal life, and it gets tough to keep up with all the things I like to do here. It's probably not going to help when my daughter is born this summer, but hey, I've been waiting for that moment all my life, and I cross that bridge when I get to it.

If you've never seen this on my blog before, its a very simple game. I present two actors who have played the same character, and then I give my readers one week to vote and decide who they think portrayed the said character the best. We've had fun over the years battling it out with characters such as Batman, Hulk, The Wicked Witch, Lois Lane, James Bond, The Wicked Witch and so on and so forth. It's been a while so let's dive right in.

If there is one monster that has frightened me more over the course of my life than any other pop culture monster, its Pennywise The Dancing Clown. I have a deep phobia of clowns in the first place, so add that this monster chooses to wear the skin of the clown in order to lure children to him and he can embody the deepest, darkest fear of any person in their proximity, dear god that's terrifying. I watched the 1990 version of "IT" and read the excellent Stephen King novel over one long summer, and while I enjoyed both experiences, it made me a bit delirious. The rain used to freak me out, being in the shower would freak me out. As I got older, I didn't feel the 1990 version held up very well. Tim Curry still did very well, and there are definitely some pros to his version, but the version itself just doesn't have the shelf life I feel it should. I dreamed of an updated version of this story. Apparently, Hollywood has been trying to get an updated version since around 2009/2010, and I prayed that it wouldn't hit development hell. Sure enough in 2017, we got that updated version. Bill Skarsgard it the scene with a powerful statement, but now, who played it best?

My Two Cents
This is one of the hardest editions of this column. On one hand, I think Tim Curry's version has a strong leg to stand on mainly due to appearance. I think Curry's is a little scarier simply because he looks like a normal clown. Skarsgard's version suffers from one fatal flaw that so many horror remakes suffer from, its clear the filmmakers tried to make Pennywise scary. Curry is extra scary because he looks like a conventional clown, so when the creep sets in, it leaves the audience in more of an unease. Skarsgard just looks like he's trying too hard, and in the book, Pennywise looked like a normal clown until he was ready to strike. That sense of normalcy should have been important in both versions, and I believe that only the 1990 version embraced it. With that said, I laugh more than I get scared when I watch Curry's version. Like I said about that shelf life above, Curry just feels outdated. While Skarsgard's version is clearly trying to scare you, he succeeds more often than not. So, while this is incredibly tough, I have to give the edge to Skarsgard.

Agree? Disagree? Fire away in the comment section below. You can also email me your answers at bloggershawn@gmail.com. A week from today, I will announce the winner. Now its time to get back on track with this thing!
Posted by Shawn Hoelscher at 8:47 PM