So the first trailer for "Venom" is here.

I've been on the fence about this, and I can't truly say the trailer has won me over. Especially since we don't even see Venom in any capacity. Something makes me wonder if Tom Hardy signed onto this thinking he was going to be in an MCU movie, only to be a little disappointed that he wasn't. Now, he can't get out of his obligations, so he's just going for the ride.

I am little confused by Sony's thinking and how they will allow Spider-Man in the MCU, but some of his villains and supporting characters will get their own franchises in a separate universe. "Catwoman" in 2005 was all kinds of terrible, and part of the reason it was so terrible is that I don't think audiences want a universe where Catwoman never interacts with Batman. I am not sure Venom really works without Spider-Man given the comics history. They are going to have to do some serious re-tooling and rely heavily on the Ultimate Marvel version of the character, and perhaps that all won't be enough.

I've been reading comics for a long time, and I didn't get much of "tense imagery" with the typical gritty Tom Hardy voice-over. I am not sure what the average movie-goer will think of this. 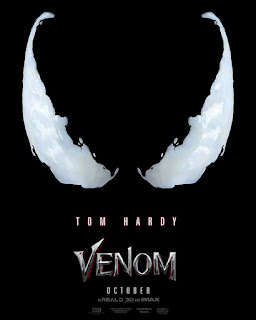 Posted by Shawn Hoelscher at 10:27 PM