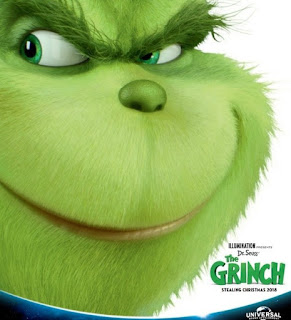 Who here has been watching The Winter Olympics. If you have, you may have caught a glimpse of the brand new Grinch coming to cinemas soon.

When the live-action, Jim Carrey Grinch movie came out, I was in fifth grade. I went to a packed theater with my parents, and two friends from school. We enjoyed ourselves well enough, but I am not sure it was due to "The Grinch," even at such a young age, I wasn't blown away by it. Despite the inspired casting of Jim Carrey, despite the remarkable set design and cinematography, it just wasn't that good of a movie and I remember it got lots of hate for the time.

Its hard to believe that the Carrey movie came out 18 years ago. Now a new generation of children are in the world, and I am not sure the Carrey version is suitable for them. We are getting an animated version of the story from Universal, the film will feature Benedict Cumberbatch providing the voice for The Grinch. Man, could Universal be anymore on the nose?


Looks fine. I haven't been a huge fan of the recent Dr. Suess adaptations haven't been the best. We'll see how this goes.
Posted by Shawn Hoelscher at 9:04 PM