Always my favorite part of the Super Bowl is seeing all the coming attractions.

I apologize. I meant to write this last night, but then, something happened. Something that completely changed the trajectory of my attention. Ironically, it has to do with this post. You've no doubt heard about it. You've probably already read my review. I had to hop on my Netflix account, immediately after the game, and watch "The Cloverfield Paradox." Almost twenty-four hours after my first viewing, I am still thinking about it. The reaction to the film has been divisive. But are we really surprised by that? This is a J.J. Abrams production, of course we are going to be confused. Of course its not going to be everyone's cup of tea. But it gave me what I wanted, something to think about. Something I will theorize about until October probably. "Cloverfield 4" has already been filmed, and its going to take place during World War II. It's coming later this year, and more than ever, I'm excited.

The "Jurassic World: Fallen Kingdom" peak looked fine. Not something that is jazzing me up to see it. But it looks fine. What looked like it was going to be a dinosaur survival movie looks like its just going to be another dinosaurs-eat-humans movie. Kinda disappointing. I also can't help but wonder if they are purposely leaning on nostalgia with this teaser in order to keep people interested? I just don't see what mileage this franchise still has.

The Rock's "Skyscraper" looks like it might be fun. It doesn't appear to be based off of an existing franchise. Or a novel. Or a movie. Or a comic book. Or a video game. Or a YA book series. Or anything like that. They are relying on star-power to get butts in seats here, which is wildly ambitious in this day and age. I hope it works out for them. I hope this ends up being a fun movie.


"Avengers: Infinity War" I can't even with you right now. God, I'm so excited.

This could end up being a sleeper hit, a movie nobody expects but turns out awesome and succeeds through word-of-mouth. It's got a great cast, a hell of a hook for a premise. I love that we are getting good glimpses into the story, without having the whole thing being given away. Let's hope this one sticks the landing.

If you missed the first season of "Westworld" on HBO two years ago, time to catch up by any means necessary. This was my favorite thing on TV two years ago, and I've been patiently waiting for its triumphant return. I never would have guessed this show could make Kanye West music beautiful, nice touch there HBO!


This one has had me intrigued for almost a year now. I am a huge, huge Stephen King fan. That is no secret around here. In the age where we are actually getting good King adaptations, why not try something different? Castle Rock is a small town, which has been the setting for many of King's books and short stories. It may not be a real place, but King has a way of making places feel more real than we realize. This is sure to be one of the highlights of the year, TV-wise. It's got a great cast, and I love that we can't even begin to guess where the storyline is going.

Jack Ryan stories, through TV or movies, have been hit or miss since the early 1990's. I can't say I'm fully onboard for this, but I'll definitely give it a try.


Last night, we got our first look at "Solo: A Star Wars Story," the next anthology movie featuring a young Han Solo. Earlier today, we got a full trailer. I am so on board for this. Everyone looks perfectly cast. Plus, it doesn't look like it will just be a simple karaoke CD about Han Solo. It would be easy just answer all the unanswered questions regarding the character, but it seems we will get a nice, stand-alone story. I am all aboard!

Oh, and check out these posters! 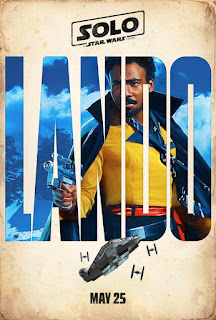 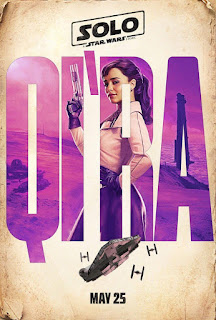 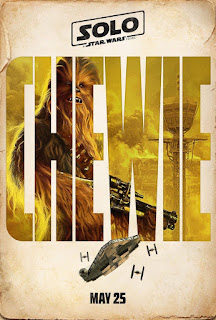 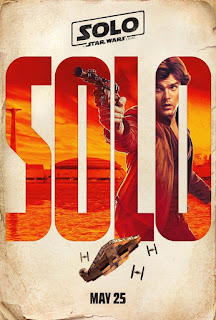 Another trailer that debuted last night was for "Mission: Impossible Fallout," the sixth installment of the "Mission: Impossible" series. Also today, the official trailer was released. It looks bananas. But I like that there is something of a continuity in these movies. Sometimes. Almost. Better than the Bond movies. The Bond films, as good as they are, always felt like a giant unconnected, episodic TV show. An anthology of sorts. (Up until the Daniel Craig era, that is) While the continuity in the "Mission:Impossible" series isn't perfect, I like that they are at least trying. I continue to be invested in this series. Hoping for another good one!

That's all! Which one did you like the most!
Posted by Shawn Hoelscher at 8:52 PM