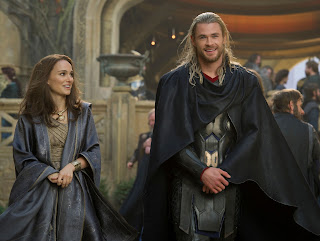 After “Iron Man 3,” came the next sequel to our favorite god from Asger, “Thor: The Dark World” I initially enjoyed when I saw in November of 2013. If you read my original review, you’ll see that when I pondered if it would be as good as the first “Thor,” I honestly didn’t know. I got the Blu-ray for “Thor: The Dark World” fairly early upon its release, and I’ve watched it a couple of times, but not nearly as much as other movies in either phase of the MCU. I did notice that as I watched it again last night, that I was actually getting impatient with the movie, and I don’t think it moves at quite the same pace as its predecessor after repeat viewings. I still the action scenes are better in “Thor: The Dark World,” and I still think Chris Hemsworth is much looser here than in the first “Thor” films and even “The Avengers.” But there are some nitpicks that continue to nitpick at me, and I think after seeing the film a couple of times, I can articulate them better.

Overall, I still think “Thor: The Dark World” is still a really good movie. I think it feels more like an adventure compared to the last film. I think they upped the action in this sequel and I feel the upped the stakes a little bit more. There is going to be an ongoing debate over the tone of the overall MCU, but I will argue any day that not all of these movies are exclusively for children, and those DC fanboys and general naysayers are genuinely not paying attention. It’s ironic that the caption for this film is “The Dark World,” because the story is more serious in tone, much like “Iron Man 3.” Not only is the film’s main villain trying to destroy the universe in a brutally dark way, but Thor’s evil brother Loki ends up on the Asgardian throne without ever letting anybody know he’s done it. There is kind of a bleak ending to things, and we’ll elaborate on a little bit more on this in future installments, but I definitely think that they did a good job balancing the usual marvel swashbuckling humor with some darker turns in the story. Between Algrim’s transformation as Kurse as well as Thor losing a hand, there is still some material that is completely suitable for children. I would also say that the few battle scenes, which aren’t nearly is scary as in “Iron Man 3” are a little rough and may not be suitable for children, but parents that’s up to you.

Some of the big flaws in the movie include how the film is structured. Personally, I would have loved a whole series of Thor movies just dealing with threats to the nine realms. I would have loved a trilogy of movies that moved him across all nine of the realms, fighting all sorts of colorful, crazy monsters. I would have loved to have seen The Warrior’s Three and Lady Sif fleshed out more. I would have loved to see an MCU version of Bolder and other characters in the Thor stable. One thing I loved about Wakanda was that it was mostly a Wakanda-specific story. Yes, they take slight detours to other places, but the action stays exclusively in Wakanda, and it becomes a real place even though its fictional. In the early days of superhero movies, and you still see this today, there is always a need to bring the action to Earth. While I love seeing other places within the nine realms and Thor’s mythology here, the detours to Earth really slow the action down. Yes, I get it, they had Natalie Portman on the payroll, but that doesn’t mean it’s a good CREATIVE decision. You saw it in “Green Lantern” in 2011, you saw it on “Inhumans” last fall, you saw it in the cheesy “He-Man” movie and probably others I refuse to remember. Every time someone tries to adapt a weirder character, they HAVE to bring the action to Earth, in order to make things, I don’t know, less weird?

It’s an extra problem because nothing much of consequence or excellence happened on Earth, aside from the film’s climax. Natalie Portman is great, no doubt about it, but she wasn’t giving anything to do here. She proved in the first film that she could be a provocative, smart Jane Foster, here she’s just the damsel-in-distress. I am no fan of Kat Dennings, and I found her character Darcy to be boring, tedious and frankly not needed. I never really realized how much the character annoyed me once I rewatched the first two “Thor” movies, but I am glad she didn’t end up in “Ragnarok” and I hope to god I never have to see her again, and they totally wasted Chris O’Dowd by giving him a throwaway cameo role instead of something significant.

In speaking of wasted characters, after the first two “Iron Man” movies, we really began to see a long list of wasted villains starting with “Thor: The Dark World.” As I stated in my review of “Black Panther” a few weeks ago, the villains can be just as marketable as the heroes. The MCU has got much mileage out of Loki. Comic books have a history of reusing villains at an alarming rate, and its commonplace to see villains more than once in the world of comic books. So why does the MCU choose to kill so many of them off? Christopher Eccleston has a knack for creating great villains, and I think, despite the predictable and safe plot, he does a really good job bringing Malekith The Accursed to life. Eccleston has always turned characters in gold, and he’s no different here. I also really liked Adewale Akinnuoye-Agbaje as Kurse, and I can’t stand that they gave him so little dialogue and so little to do, because Akinnuoye-Agbaje is great in everything he does. I would have loved to have seen these characters a bit more fleshed out, and when it comes to MCU’s villains, I am going to sound like a broken record in that regard.

I know, I know I probably sound grumpy. I don’t mean too, I am not trying to act like “Thor: The Dark World” is a bad movie. I still really enjoyed it. I think Hemsworth still has the charisma of a god. I love that Stellan Skarsgard’s Erik Selvig was so beloved by fans. I like Skarsgard, and I enjoyed him in every movie he’s been in. Selvig was an original creation for the first “Thor” movie. Then Skarsgard kept returning and returning, and continued to have meaningful parts in these MCU movies. Now, in the mainstream Marvel comic universe, Erik Selvig has become a character. That’s pretty cool. I think they do a good job of really balancing the more serious story threads with some quirky Thorish humor. It’s kind of a sad movie. Frigga, Thor’s mother played by Rene Russo dies. We believe Loki dies after a moment of grace and characters are constantly in danger, but that makes the more humorous moments count more. There are good transitions here.

“Thor: The Dark World” also really introduced the big story thread that the franchise would be chasing from 2013 until the present. When Thanos was introduced during the mid-credit scene at the end of “The Avengers,” I got pretty giddy, but I had no idea what Marvel was planning. For some reason, the idea of the Infinity Gauntlet, which was so tied to Thanos in the comics, never crossed my mind. I can’t tell you why, but it never occurred to be in the slightest. So, when Benicio Del Toro’s The Collector shows up, rambling about Infinity Stones, that got me even more excited. I put two things together and the possibilities became extra exciting. In just a few short months, we will see how well Marvel can payoff this hefty risk of a storytelling device, it’s certainly been crazy since “Thor: The Dark World.”

I continued to really like The Warrior’s Three. I think Ray Stevenson was perfectly cast as Volstagg, and it gelled better than I expected. I can’t really say who I prefer between Joshua Dallas or Zachary Levi for Fandral, but I think Levi certainly did some memorable stuff with the character that I really liked. I like Tadanobu Asano as Hogun, but I never feel like he was given much to do, in any movie. I think Anthony Hopkins always really enjoyed working on these films. He seemed to relish every line. He was never afraid to ham it up. He really went over the moon on playing with the Shakespearean lingo of some of it. Anytime Thor or Loki or another character says something Odin disagrees with, I love his little laugh. I truly believe Hopkins loved doing this.

I truly don’t hate the movie, but I think “Thor: Ragnarok” really highlighted the flaws of the first two movies, and did a good job of perfecting those flaws.

Does anybody else wonder whatever happened to that frost monster at the end of the credits? Is it still running around London?

Next week, we’ll take a look at my favorite MCU film.

For my look back at "Iron Man," click here!

For my look back "The Incredible Hulk," click here!

For my look back at "Iron Man 2" click here!

For my look back at "Captain America: The First Avenger" click here!

For my look back at "The Avengers" click here!

For my look back at "Iron Man 3" click here!
Posted by Shawn Hoelscher at 8:10 PM