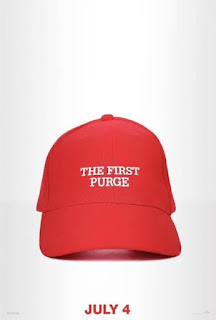 "The Purge" franchise has been an interesting social satire about our country adopting a law where one day each year, all crime is legal for twelve consecutive hours. Somehow, this law has brought unemployment and crime rates down. It's got an interesting hook, but I am just not sure this has become everything it could be. With that said, the movies get better as they go along, and James DeMonaco, who has written and directed all three "Purge" movies, edges closer to making the movie I believe he wanted to make in the first place.

On July 4th, a date that also seems perfectly timed, we will get the prequel to DeMonaco's story. He will only be a writer on this film, Gerard McMurray will take over directing duties. On this night of Trump's first State of the Uniom, a trailer for the film was released. We don't really see any footage, its just a faux commercial for Purge Night. Clever.

I'm not sure either date could be more perfectly timed if they tried.

This franchise has been fine, I guess. I don't have strong feelings for it one way or another. I don't think its really embraced its material in a fun or innovative way. It seems like Trump will be highlighted in the film due out this summer. I just hope heading into prequel territory doesn't set the whole franchise back. I usually hate prequels, can this one win me over?


Posted by Shawn Hoelscher at 9:09 PM