The First "Ant-Man And The Wasp" trailer 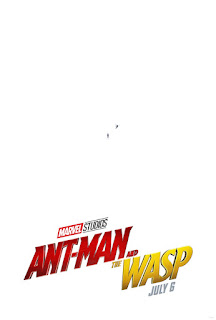 The new poster for "Ant-Man and The Wasp" is above, can you find where they are?

I'll give you a hint: Those aren't smudges on your screen.

The new trailer for the upcoming film landed on the internet too, and while the heroes in this film maybe small, the trailer made a gargantuan impression.

If you wondered why Evangeline Lilly's "Wasp" wasn't a player in "Captain America: Civil War," you'll find out here. In fact, it looks like the story will kind of involve how Ant-Man's action in that film put the Pym family in some danger. It looks like Ant-Man might be on house arrest too, which I guess isn't surprising. I wonder how this will tie into Infinity War though, will this take place before Thanos lands on Earth? I suppose we'll see.

I like that this movie looks like it will once again be delightfully weird. The image of a giant Hello Kitty PEZ dispenser flying at a car full of bad guys? Yeah, that pretty much sold me on the movie. As if I wasn't already sold on the film. Wasp gleefully dodging a knife and our first look at her movements, wings and her "stingers" was pretty awesome too.