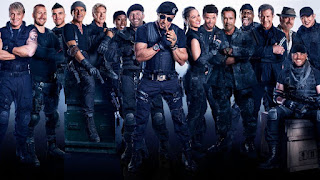 Sylvester Stallone loves hyping up his own projects.

He's actually kind of funny, when you think about it. Only because I truly think he's being sincere, but sometimes things don't always work out the way he says. Like a five-year-old kid describing their sixth birthday party, and they're imagining giant robots, and spaceships with trips to the moon, and getting a pet dragon. When in reality, their sixth birthday party ends with pizza, cake and ice cream.

When "The Expendables 2" was getting closer to release, Stallone gave a huge list of people who would be in the movie. He described that Bruce Willis' Mr. Church would turn out to be a villain, and that another CIA agent played by Charlie Sheen would recruit The Expendables to stop Church. The second Expendables film didn't quite end up like that. Nor did Vin Diesel, The Rock, Lorenzo Lamas, Jeff Speakman, Hulk Hogan, Carl Weathers or Ryan Seacrest (Yes, Stallone said he was thinking of putting Ryan Seacrest in a film) end up being the "Expendables 2." For "Expendables 3" Stallone said that Nicolas Cage, Jackie Chan and Milla Jovovich were on "fast track negotiations" to be in the sequel, which turned out be untrue. Oh, and for some reason, Stallone wanted both Stone Cold Steve Austin and Jean-Claude Van Damme to re-appear as twins of their villains they played in previous movies. Why? Not sure.

So yes, Stallone talks his head off. But the idea of an "Expendables 4" has been on the table for a couple years. It was supposed to be released two years ago. But there was some kind of disagreement between the studio and Stallone. Stallone said he wasn't coming back for the fourth, then Schwarzenegger said he wouldn't either. Then any and all rumors, speculation and news around the sequel just died. I figured this potential franchise would be a mere trilogy.

Today though, Sly Stallone has confirmed on his Instagram page that a fourth Expendables movie is happening. Stallone also confirmed that he will be returning as Barney Ross and the whole crew is returning, with "some new members"

Who will these new members be? Jackie Chan? Nicolas Cage? I know he's tried hard to get Steven Seagal on these movies, will he finally enlist? I'd personally love to see Vin Diesel and The Rock join. If I was in charge of casting, I'd throw Michael Jai White on the roster, as well as Chow-Yon Fat, Tony Jaa and Michael Biehn.

Who would you like to see in The Expendables 4? Or will they call it Expend4bles?