Slow Start in January: It Happens Every Year 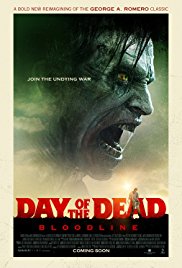 It happens every year.

I even made mention of it on Monday night. January is a slow start to the year of movies. That's not to say that nothing gets released. It's just that nothing of real consequence gets released. For some reason, January is a month where the studios take an ex lax and relieve their bowels, if you will. Unfortunately, the audience is the loser in that situation and every year, cinemas are flooded with crap. Sure, every once in awhile there will be a January release that surprises and astonishes, but that's as rare as winning the lottery.

Last night, I watched "Day of the Dead: Bloodline" which is a quasi-remake/sequel, but its not really, but sort of. All I was hoping for was a silly, stupid zombie movie, and what I got was a waste of time. I was so unimpressed by it that I couldn't bring myself to write about it. If I'm so appalled by a movie that I can't even bring myself to write down why I don't like it, then I hope that's a clear indicator on how bad it got my goat. It's lazy, its ugly, its predictable, and its poorly acted. Throw in a needless, sleazy, tension-less near-rape scene that feels forced more than anything else...god, it's the prime definition of "in bad taste."

January isn't all bad though, if you live in the Midwest like me, or somewhere which is nowhere close to New York City or Los Angeles, then all the big award-worthy movies are slowly trickling down to our neck of the woods. I am working on reviews for "The Post" and "Molly's Game" and I hope to have those published soon. Overall, I did fairly well as far as seeing the award-centric films of 2017 before the year was out, so that was a win for me this year.

But a slow movie month gives me time to work on other things for the site. I am gathering some good thoughts on my "Ten Years of Marvel" column, and getting ready to write about "Iron Man 2," and I am gathering thoughts on a special piece that I meant to write earlier, but didn't get to. I will be publishing that tonight.

January through March is usually slow for movies, but perhaps the February mold will break with "Black Panther" next month. That looks amazing!
Posted by Shawn Hoelscher at 7:32 PM