Review: "The Greatest Showman" displays great energy in search of a movie. 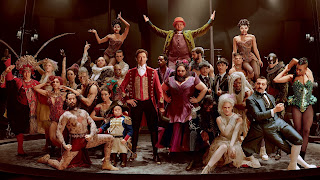 I have only been to a circus a total of two times. For the most part, circuses freak me out. I’ve always felt bad for the animals and I am generally creeped out by clowns, so circuses have by and large been no-fly zones for me. But I had to figure that the story of P.T. Barnum could have been an interesting movie. I’ve always liked Hugh Jackman as an actor, so I definitely had some interest in the movie. When I found out it was a musical, that truly didn’t bother me. I love “Guys and Dolls” and “West Side Story” and “Singin’ In The Rain” and “Moulin Rouge!” and a handful of other musical films. Hugh Jackman actually starred in the 2012 version of “Les Misérables,” which I honestly thought was spectacular.

Sure enough, Hugh Jackman once again shows off some musical flair in the movie. I know he really sings. I know he really dances. I know he’s done some Broadway before. I know he really is talented on many different levels and I commend him for it. He makes “The Greatest Showman” watchable with his unbelievable dedication to the production and his role. He feeds off the undeniable energy of the film. Oh yes, there is an energy to the film and I have to say that there is lots of material that works here. I do like the musical numbers. I do like the actors in the movie. I like the costumes and the art direction and the set design. It all molds itself into a wonderous, dreamy spectacle that worked. In most places that is.

Zack Efron is an actor I think works sometimes, his talent seems to be a bit staggered. Sometimes he’s got some good comedic and dramatic timing, other times he’s painful to watch. For “The Greatest Showman,” I think he works. He never overacts here, and he carefully and artistically etches in details. Zendaya is proving to be a miraculous talent, and an actress that is going to have a promising career in the movies. Michelle Williams and Rebecca Ferguson are both incredible actresses, and while Michelle gets much more screen time than Ferguson, I don’t think either actress is in the film enough, but they make their short bursts of time well done. I have to say that Keala Settle absolutely steals the show as the Bearded Lady, one of the first acts Barnum recruits to his circus. Whenever she’s on-screen, you can’t look away. Not because of her looks either, because she is absolutely dedicated to her character, head to toe.

With all that said, what bothered me so much about “The Greatest Showman?”

Well, sadly its not much of a movie at all.

“The Greatest Showman” is one of those biographical films that feels like a giant montage instead of an actual movie. While watching it, it felt to me like I was watching a long commercial for the movie about P.T. Barnum’s (Hugh Jackman) life, instead of getting anything that feels like an actual story. When the film begins, we get a montage of P.T. Barnum growing up and crushing on the girl he eventually makes his wife. Then there is a montage P.T. Barnum getting the idea of a circus, and trying to get a loan. Then there is a montage of him recruiting people for the circus acts. Then there are montages of his circus in action. The entire film feels like a montage.

Its too bad, because there is clearly lots of good work being done on this film. Each actor throws themselves into their roles. Determined to sing and dance and smile and become their characters. It’s clear that director Michael Gracey surrounded himself with good collaborators, because every detail of this film, no matter how miniscule, is just majestic. The songs are what you’d expect from a classic musical. There is so much great work on display here, but most of it is extra. We need a story to justify all of the good extra details. Sadly, there is just not as story here, not quite.