Most Anticipated Movies of 2018

I know, I know, there is only roughly two and a half weeks left of January, and I am just now getting to my Most Anticipated Movies of 2018. But hey, better late than never I always say. I do always like giving you ideas, giving people a heads up on everything that you might enjoy as far as movies go for the year. So as I always say, get your calendars out! 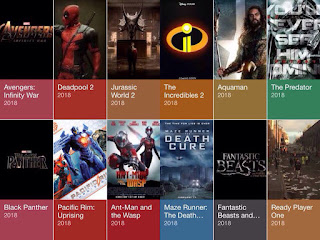 The Art of the Blockbuster
Every year, there are just those movies that will suck all the air out of the room. The year 2018 will be no different. Get ready for more superheroes, more sequels, more movies associated with an ongoing franchise, more world-building, more adaptations, etc, etc. I could go on and on. Sometimes it feels like we are starting to get sick of all the glossy product, but studios can still manage to keep churning them out. So, someone somewhere is doing something right. It's not all bad though, there are some mainstream blockbusters that I am absolutely looking forward to. Black Panther kicks off another exhausting, yet thrilling stack of Marvel releases, coming to theaters on February 16th. Then Avengers: Infinity War on May 4th. Then then the MCU films will conclude with Ant-Man and Wasp on July 6th. Non-Marvel Cinematic Universe movies will include Venom on October 5th, then X-Men: Dark Phoenix on November, finishing with Spider-Man: Into The Spider-Verse on December 21st. Also being released on December 21st will be DC's Aquaman.

On the non-superhero side of things, get ready for more sequels and franchise-fair. There's Maze Runner: The Death of the Cure on January 26th. There's Fifty Shades Freed on February 9th. The remake of Death Wish will splatter the theaters in blood on March 2nd. A Wrinkle In Time will come the following weekend on the 9th, then Tomb Raider the weekend after that on the 16th. I know not everyone liked the first "Pacific Rim" film, but I did, and I am looking forward to Pacific Rim: Uprising on March 23rd. I've been powering through Ernest Cline's Ready Player One and highly anticipating the release of the movie on March 30th. Not sure how I feel about Rampage on April 20th, but on that same day, I will be first in line for Super Troopers 2. Deadpool 2 will dance into theaters on May 18th. We'll get the all-women Ocean's 8 on June 8th. I will be interested to see Incredibles 2 on June 15th. I am hoping to God its good, the first film is my favorite of the Pixar films, but their track record with sequels has been pretty poor so far. Jurassic World:Fallen Kingdom will come June 22nd, which looks like bland fair, but I never thought we'd get a sequel to "Sicario," but Sicario 2: Soldado will come June 29th. Early July will grace us with The Purge: The Island, and Hotel Transylvania 3 and Momma Mia! Here We Go Again! August will grace us with reboots/retoolings/reimaginigs of classic films such as The Predator and Scarface, and if you can imagine it, the first in the beginning of a film franchise based on Barbie. A new Robin Hood movie not connected to Russell Crowe will come out September 12th. A new Halloween franchise and a second "Jungle Book" adaptations titled Mowgli will be released on October 19th. Creed 2 and Ralph Breaks The Internet: Wreck-It Ralph 2 will hit theaters on November 21st. The year will punch out in December with a "Transformers" spin-off called Bumblebee: The Movie and Emily Blunt's Mary Poppins film called Mary Poppins Returns.

The Weird and the Quirky
I am not going to only suggest franchise films, sequels, prequels, adaptations and world-building films. There is plenty of stuff, not associated with a current franchise, that will be worth your time I bet. Alex Garland's new film Annihilation seems like another engaging science fiction film, and he's putting together a stellar cast for it. That will be released on February 23rd. I think J-Law's upcoming, gritty spy movie Red Sparrow looks interesting, that will hit theaters on March 2nd. Thoroughbreds was an indie that made some noise at the Chicago International Film Festival in October. I didn't get a chance to catch while I was there, so I look forward to March 9th. Wes Anderson is one of those directors who, no matter what, I always get excited for new projects. I can't wait for Isle of Dogs, and his triumphant return to stop-motion animation, coming March 23rd. A Quiet Place looks like a different kind of horror film, and I look forward to that on April 6th. I've been drawn into the Cloverfield movies, and I am highly intrigued by God Particle coming April 20th. I watched a documentary last year about The Slenderman urban legends, and it was quite thought-provoking. I will look forward to the Slender Man movie coming in May 18th. Perhaps the thing I am looking forward to the most this year is The Happytime Murders, a different kind of muppet movie being made by Jim Hensen's son, Brian Hensen, with Melissa McCarthy, Joel McHale and Maya Rudolph starring. I'd ask you to seek out trailers for Like Me and Bodied, I think certain circles will be talking about those films once released.

Solo: A Star Wars Story was originally going to be released in May, now I think its moving to December. Mission: Impossible 6 is coming later this year, as well as a Benedict Cumberbatch-lead The Grinch. And I do wonder if Peter Jackson and his talented crew can make another big thing out of Mortal Engines, coming early December. The trailers certainly look promising. I think there are plenty of things I am not thinking of and I certainly don't know everything coming out. I always say every year that trying to predict your top ten of a year is next to impossible, and I just can't wait to see the year play out.

What are you most excited for?
Posted by Shawn Hoelscher at 7:12 PM