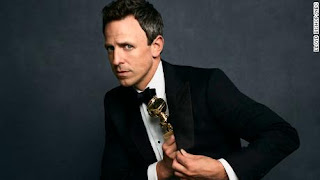 Last night was another installment of the Golden Globe Awards. The more laid back awards show that highlights the best of last years TV and movies. Last night was a bit more somber and serious. Well, maybe that's overselling it. It seemed like everybody was still having lots of fun. It's just that all the women in attendance wore black dresses. Just about all the men in attendance wore pins that read "Time's Up." This was in protest of the many stories that dominated the news last year. It seemed like Hollywood was a hideous pool of creeps and every week on the news, hearing about a new man being accused of sexual harassment, or perhaps something worse, well it almost felt like a bad reality TV show. It was good to see the business coming together on a united front and tell the world that they still believe in the integrity of the business. That's a good thing, and the theme rang true all throughout he ceremony last night.

Seth Meyers was fine as the host. Not great, not horrible, not spectacular, but fine. While I will admit that he garnered a few laughs out of me, I can't honestly say that he was funny throughout the entire ceremony. It was definitely awkward, being a male host on a night that was representing awarness for female sexual harassment and for promoting women's empowerment. But the thing is, Seth recognized this up front, so I can respect the guy for knowing that he was a little out of his league, and he did the best he could do. There was definitely some funny material there, and even some edgy material. (regarding Harvey Weinstein: "Don't worry he'll be back in twenty years when he's the first person booed during the In Memoriam") But perhaps a female host would have been better this year, that was highlighted just a bit when Seth Meyers did his awkward add-a-punchline routine, it was Amy Poehler who lightened up the mood and got people laughing. ("I'm a woman in Hollywood Seth. I don't need a punchline Seth") Seth Meyers did the best he could, but perhaps have Poehler and Fey back next year?

I was pretty happy with the movie side of things overall. I wish "The Florida Project," my favorite movie from last year, was better represented. But I liked Guillermo Del Toro winning best director. I really enjoyed Frances McDormand's acceptance speech, ("tequila on me, ladies!"). In fact, it was a big night for "Three Billboards Outside Ebbing, Missouri," it took four wins overall, including one for McDormand's co-star Sam Rockwell. As well as best drama film and best screenplay. I wonder if the film will dominate at the Oscars too. I just hope in March, James Franco gets a best actor nod for the Oscars. He was favorite performance by any man last year, and I was glad he recognized for the comedy-musical side of things. His acceptance speech was heartfelt, and I get why he didn't want Wiseau taking his moment, but man, I would have loved to hear Wiseau speak that night. I was happy for Alison Janney winning for "I, Tonya." I haven't had the chance to see "Phantom Thread" yet, but I always just expect to see Daniel Day-Lewis win everything he does, so it was crazy to see Gary Oldman get it. I was happy for him. "In The Fade" winning foreign film was also the arguable upset last night, beating out "The Square."

All the love for "Big Little Lies" on the TV side of things made me want to barf. I still think its one of the most overrated things on television last year. But I expected it to do good, and it did, winning four Golden Globes, big wins for Nicole Kidman, Laura Dern and Alexander Skarsgaard (who gave the most awkward speech of the night.) But the TV side wasn't all bad. Sterling K. Brown won for best actor in a televised series-drama, and gave one of the better acceptance speeches. I think Aziz Ansari shocked the world with his best actor in a televised series-comedy, but I liked that shock. I was proud of him. I liked that "The Handmaid's Tale" won two Golden Globes, it may have disturbed the shit out of me, but still one of the most brilliant shows of last year. Ewan McGregor winning for "Fargo" was great too.

Oh, and Oprah Winfrey's speech for winning the Cecil B. DeMille Award. Damn. Just damn. I am still speechless from that one. Amazing speech. That was empowering and enlightening, Meryl Streep was just bitter.

Not only was Oprah Winfrey's speech powerful, but also incredibly important to the night. Still, even though it was a night to highlight women's empowerment, they are still receiving the shaft from their peers. Immediately after Oprah's rousing speech, Natalie Portman shed light that all the directors in the best director category were men. I am a little surprised by that. I would have given a nod to Greta Gerwig for "Lady Bird," or Dee Rees for "Mudbound" or Angelina Jolie for "First They Killed My Father." Even Patty Jenkins for "Wonder Woman" would have been nice. There is still some struggle in the business, and I hope they begin to work towards looking under every stone to find the best nominees.

Kirk Douglas making a public appearance was pretty epic. Frances McDormand shooing the cameraman out of the way so she could hear her co-star's acceptance speech was hilarious. Overall, it I enjoyed the winners. It was a beautiful, powerful night.
Posted by Shawn Hoelscher at 9:19 AM