I'll be honest, I am not a fan of the idea of a Venom movie. I think I made that pretty clear when news started spilling out about this film. The inclusion of Tom Hardy has definitely perked my interest, but I am still not totally sold on a stand-alone Venom movie. It doesn't help that the movie doesn't take place in the Marvel Cinematic Universe, which seems like a head-scratcher move on Sony's part. What's Venom without Spider-Man? I really don't see the point. Sony's stand-alone Marvel Universe is an even bigger head-scratcher. Does Sony truly believe that they can sell a shared universe off of Venom and some C-list villains and some supporting characters? Do they truly think that a Black Cat movie and a freaking Morbius The Vampire movies are seriously going to sell outside the MCU?

I suppose never say never, right? Weirder things have happened in this business. I am sure there is a bitter taste in Sony's mouth regarding having to give up their Golden Goose, sending them back to the people that sold it to them. I am sure it stings a little that "Spider-Man: Homecoming" was so popular and well-received. Sony wants to get into the shared universe business because everyone is, but they working from a very limited pool here. I don't know why they'd push chips on something that they are literally working uphill to get together. 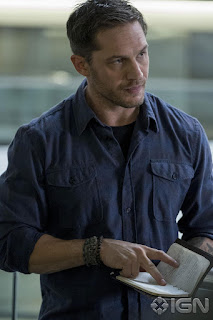 There was also a promotional video made for the movie and released on the internet today. Again, as far these videos go, not much happens. The director and the main star weren't even at the event they are promoting at, due to snowy conditions. Not much to get excited for yet, but I suppose if you're a die-hard Venom fan, you feeling that energy.


Me? I'm going to need a trailer in order to get excited for this. Its funny, Marvel Comics is really investing in some Venom stories in the future, so Sony needs to make sure this movie works. This odd concoction of an idea needs to hit the ground running. Will Sony succeed? I don't know. I just hope the trailer can get me jazzed for this. I love Tom Hardy, but a big star isn't enough to get me interested.