SEASON FIVE, EPISODE ONE AND TWO- "ORIENTATION PART I AND II 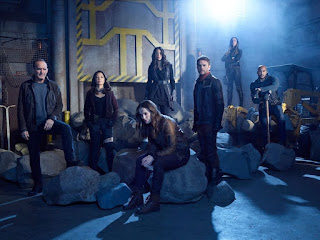 Ever since I started writing weekly recaps and reviews of “Agents of S.H.I.E.L.D.” the road has been long, wild and often bumpy. There have been times when I have jumped for joy over the show and there have been just as many times when the show left me cold. I don’t think I’ve ever outright hated the show, but I don’t think it’s ever reached its highest potential. That is mainly due to several missed opportunities and not fully exploring a big idea it offered up. But the show has managed to play it fun throughout its successes and failures, which has kept my attention.

I’ve been waiting for the moment when the show was going to mix things up. Albeit, it already has to a degree, mostly thanks to the movie end of the Marvel Cinematic Universe. I was glad that “Agents of S.H.I.E.L.D.” graduated to higher place in storytelling instead of just being an “NCIS with superpowers” type show. I like that the show decided to tell a different story each season, with the previous season’s having an impact on the next. I would eventually get bored with the idea that all this organization could investigate was HYDRA or Inhumans or some weird way to mesh both in one season. Introducing Ghost Rider and Life Model Decoys last season was fun, but didn’t provide the great storytelling I was hoping for. Introducing the Secret Warriors, a season earlier was fun, but it never lived up to the potential it should have. All of this evidence to the fact that “Agents of S.H.I.E.L.D.” was fun, not great, and sometimes coming off as afraid to try to new things.

Telling from the season five premiere from Friday, which delivered the first episodes of this new season, I can tell the show is trying something new. I can say with honesty that this new ambition will hopefully help this season stand out for the show. There is always a little stinger scene, which will have the audience guessing until next season, at the end of each season finale. Season Four’s stinger scene involved Phil Coulson looking out a window into space. What could our dear agents have anything to do with what goes on it outer space? The season five premiere opens with an unidentified bald guy (NOTE: NOT Carl Creel), taking a swim in a pool and evidentially starting his morning routine. Which includes taking off his skin before stepping in the shower. Then he brings a group of heavily armed men to the diner our beloved S.H.I.E.L.D. team was at the end of last season. They are frozen and taken away from this mysterious group, except Leo Fitz.

The next thing we know, Coulson, Melinda May, Jemma Simmons, Mack, Yo-Yo and Quake are all in outer space. They are trapped in some kind of weird space-station, although its inhabited by a small colony of humans. Which may or may not be forcibly there by a group of Kree. Oh, and there are bigger aliens known as “roaches” trying to kill everyone. Oh, and the team is seemingly trapped in the future, and finding that planet Earth has been shattered in two. So, yeah, what the hell is going on, team?

It definitely looks like the writers are proactive in taking this show in a different direction, setting up an entirely new challenge for the team. Personally, I couldn’t be happier for that, I just hope its in the direction of something we haven’t seen before. If this just boils down to the plot of an Inhuman or a HYDRA rogue cell then that will be a disappointment for me. S.H.I.E.L.D. has battled many foes during its run in the comics, and I want to see every corner explored, I don’t want to see the same challenge with a different look every season. Quake discovers at the end of this two-hour episode that humans on this mysterious spaceship use The Framework as a “vacation” from their lives. So, it seems like The Framework will play some kind of role in this new season. Okay, fine. I am game for that. That isn’t a big deal. But if the villain turns out to be another robot, that will be disappointing too. There is some potential in this upcoming storyline, and I hope it leads to satisfying conclusion. I am sure there is some kind of set up that will parallel with whatever happens in “Avengers: Infinity War” this summer, and I am hoping for some fun with that as well.

The cast is as good as ever here. All continually doing good work. There is a new addition here, a guy who kind of reminds you of Star-Lord when you fist meet him. But once you get to know his personality, he’s anything but Star-Lord. This guy’s name is Deke, played by newcomer Jeff Ward. I don’t know what side he’s really on. Before seemingly helping Coulson’s team, he severely hurt Melinda May. He may just be pro-Deke, but we’ll see. He seems to have an interestingly stark personality, and I think Jeff Ward is off to a good start with the character so far.

So, our heroes are trapped in the future, the Earth has been destroyed. They are being hunted by Kree on a ship they don’t know how to get out of. This ship is full of humans who may or may not want to help them. There are tons of people with their own agenda’s seemingly. Oh, and there is a HUGE pest control problem that needs fixing on this big ship. So, it looks like our heroes have their work cut out for them this season. It’s a wildly ambitious move to go off-Earth, and I hope this isn’t something that lasts one story-arc. I am intrigued, so that’s definitely good.
Posted by Shawn Hoelscher at 8:50 PM