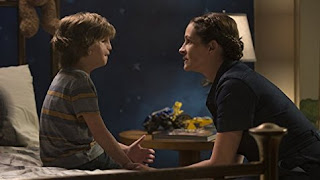 There is a type of movie that I really can’t stand. And it’s the tearjerker. Now, I don’t necessarily mean romantic movies, or sad biographies. I would call something like “The Notebook” a romantic movie, not a tearjerker. Sure, “The Notebook” is sad, but it doesn’t shamelessly rip tears out of your eyes. That’s the type of movie I can’t stand, when its specifically designed to jerk tears out of you. Those emotions are artificial to me, not organic and if I can’t reach an emotional crescendo by myself, then it doesn’t work.

One of the best recent examples of this I can think of is “A Dog’s Purpose.” It’s a movie that came out earlier this year, that I missed in theaters and then finally caught up with when it was hit home viewing. The movie is only designed for people to go clamoring for their tissue boxes, without a story or emotional arc to support it. It simply makes up rules as it goes. The movie basically revolves around a dog who lives the life of a different dog after it dies, then miraculously finds its first owner. It’s a terrifically stupid idea on paper, and I wish I could been present for the pitch meeting for this. Is there any scientific evidence or religious dogma that says dogs just go into the body of another dog after they die? Do they recognize smells from old lives? If so, how? The movie doesn’t even try, it’s too busy trying to jerk those tears out of you.

I didn’t have high hopes for “Wonder,” because I couldn’t get a good read on it. I couldn’t tell if it had a genuine story to tell or if it was going to just set up sad scene after sad scene and win the audience’s affection through waterworks. Thankfully, it’s the former, because “Wonder” is actually a brilliantly told film. Sure, it has its sad moments, but it doesn’t lean on those moments like a crutch. Instead, “Wonder” relies on good acting, good storytelling and genuine emotion in order to reach its audience and it’s impeccably successful in its actions.

Auggie (Jacob Tremblay) is a fifth-grader who has been homeschooled most of his formative career. He has been homeschooled because he’s afraid to go to a real school with peers, he was having a rare medical condition called “mandibulofacial dysostosis” which required much surgery as an infant, and now his face is suffers heavy scarring. Auggie wears an astronaut helmet to cover his face. As Auggie gets older, his parents Isabel (Julia Roberts) and Nate (Owen Wilson) worry about his future, and they enroll him at a private school for his fifth-grade year.

Sometimes, the movie feels like its going to be Auggie’s story, and at its center it truly is Auggie’s story. But its also sort of amazing how the movie also focuses on how Auggie affects many people’s lives. The film shows how Auggie’s sister Via (Izabela Vidovic) struggles with her parents constant monitoring of Auggie and how she sometimes feels left out. The film deals with the many classmates of Auggie, some of them friends, some of them friends by the end and some of them not friends at all. The film has some things to say about bullying in our school systems that I found significant. The film deals with Auggie’s principal (Mandy Patinkin) and how a certain teacher (Daveed Diggs) touches Auggie’s life. It’s all handled with a genuine amount of ease. Everything is handled with delicate care and never once feels too bloated with story.

So much of the film hinges on Jacob Tremblay. Who was so powerfully good in 2015’s “Room,” that I can’t say I’m surprised he can carry a movie here. Tremblay is a bright, bold, young performer and he’s got quite the career ahead of him if he wants to manage it. Julia Roberts and Owen Wilson are always reliable, dealing some good performances here. I have always loved Pantinkin ever since I saw him on Showtime’s “Homeland” and he does some great work in his small, brief moments here. But it’s really Tremblay who really steers this thing. He is funny at moments, tender at others and he is constantly etching in the details.

There are some classic tearjerker moments in this movie. There are many times when Auggie comes home crying, not wanting to go to school the next day. There are some serious family arguments we feel like we’ve heard millions of times before. There are the bullies that grow consciences. There is even a moment when I thought that “Wonder” was just going to become the same kiddie tearjerker like we’ve seen to hell and back, but it didn’t. Not quite. It stayed the course of the new and the fresh and I salute the film for that. There are moments when you think “Wonder” will tip into that territory, but there is so much uplifting entertainment here that feels real that I still really liked it.

Posted by Shawn Hoelscher at 9:14 PM