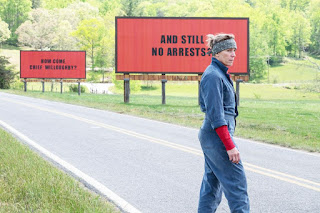 If you had a child who was brutally murdered and brutally raped, what would you do in order to seek justice? Would you go to the authorities like a regular citizen? Not a bad plan of action, but what would you do next if the authorities didn't get anywhere? What if the justice system that we rely on to keep law and order failed you? Would you go the Paul Kersey route from "Death Wish" and roam the streets of your fair city looking for muggers to murder? Would you sit around your depressing, empty home moping about it? Would you join the justice system yourself to see what you could accomplish?

These are questions movies have been answering for many years. These questions have been the basis for several revenge films, court dramas and the like. But even though this isn't a new idea, the way these questions are answered in "Three Billboards Outside Ebbing, Missouri" takes this formula in an entirely different direction. Brought to life by a powerful script penned by Martin McDonagh, who also directed the film, and also brought to life with an all-star cast, this is something brilliant.

Francis McDormand plays Mildred Hayes, a stern, mild-mannered divorced mother still grieving over the violent rape and death of her daughter. Seven months after the horrible crime, no progress has really been made in putting the people responsible for this in prison. Mildred Hayes takes it upon herself to rent three abandoned billboards outside her hometown and use them to send a message to the authorities of town. The billboards were simple. One said "Raped while dying," the next read "And still no arrests?" and the last said "How come, Chief Willoughby?" The billboards had a simple red background with simple black lettering.

Chief Willoughby is played by Woody Harrelson, who is in charge of the case, and realizes that the trail has gone cold. While he understands Mildred's frustrations, he feels that the billboards themselves are an unfair attack on his character. Not that he's alone, the town itself is firmly displeased by the actions of Mildred. The irrational, violent Officer Jason Dixon (Sam Rockwell) grows unstable due to the billboards, while Mildred's ex-husband Charlie (John Hawkes) blames Mildred herself for the death of their daughter.

Still, Mildred remains unfazed and firm in her decisions to make the billboards, which is why she is such an amazing character. Mildred is often intimidated by townspeople, and while she feels inner fear, she never once shows it. She's the kind of lady who isn't afraid to say or do anything, consider a scene where she cusses out a news reporter in front of her billboards. A character like this is catnip for Frances McDormand. This leads to one of the best performances of her entire career. Yes, I do include her brilliant work in "Fargo" in this. Her work here is beyond masterful and possibly the best female performance this year. Possibly. There are still some big movies I got to see and review, but she's certainly on the cusp.

Woody Harrelson is equally harrowing in the film, and also delivering a career-high performance. Willoughby holds a secret, which steers into his favor as far as public opinion to the billboards, and how he reacts to this secret gives the film so much raw emotional power. It's not a moment we really expect in movies like this, and Harrelson deserves credit for giving this familiar character a depth-filled, human face. Sam Rockwell does what he does best, playing damaged and demented and giving that an equally human face. There are moments in the film where you think you've got Sam Rockwell figured out in this movie, but you don't necessarily and how these characters react to this story is part of the movie's charm.

Peter Dinklage, Caleb Laundry Jones, and Lucas Hedges all provide great support and the result of is a film full of wonderful performances. This is definitely one of those movies that sometimes feels like an actor's rally, because its so rich in performance by an all-star cast. But all of this star power never takes away from the experience. This is a real story with something significant to say, and I loved every moment of it.

FINAL GRADE: A
Posted by Shawn Hoelscher at 5:55 PM