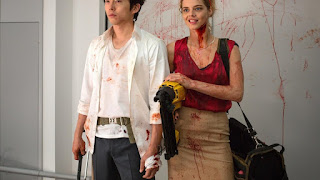 Steve Yeun grew in popularity thanks to “The Walking Dead.” Everyone grew to love Glen, that is if you weren’t like me and found him endearing from the beginning. It was a lot of fun watching him grow as a character and the incredible work Yeun did on the show highlighted the best of what the character had to offer. Even though they jumped the shark with his “death” scene only to kill not too much later in the show, it was still a worthy death and the show has missed him greatly.

I am fondly happy to learn that Yeun’s career is on the up even after “The Walking Dead.” He appeared in “Okja,” the Netflix sleeper that I think more people should sit down and watch. Now, he’s stared in “Mayhem,” a twisted, crazy thriller about one man having a very bad day that only gets worse. Many of us already don’t like working a job we hate. It only gets worse when you framed by your company for something you didn’t do. It gets even worse still when the building you work in that just fired you is quarantined and a infectious virus that forces you to unleash your deepest, darkest fantasies, no matter the stakes, is unleased in your building. All three of these things happen to Derek Cho, the character Steve Yeun plays in this movie. The virus is called D-13 or maybe it was D-17? Anyway, it allows to unleash your wildest impulses. You become extremely violent, you become extremely horny, everything you are thinking about is taken to the extreme. Choas reigns in this once peaceful office building.

Despite the chaos taking place in the office building, Derek Cho is determined to get to the top floor, where all the executives are barricaded, and plead his case to keep his job and uncover the shady dealings that got him fired. He must fight his way through the never-ending people that look like they have been hit with a slight version of the Rage Virus from “28 Days Later.” He joins forces with Margot Robbie look-alike Samara Weaving who plays Melanie who has a grudge of her own with the company’s executives. What ensues is a blood-soaked satire of office life and how we are sometimes too bound to the jobs we live, even when we don’t particularly like them.

The film doesn’t even pretend to be grounded or gritty. “Mayhem” knows full well it’s a movie, and it is aiming to please you for every amount of its running time. It is a movie that is covered in blood. There are some cold, hard laughs, but they land with a sharp punch. Don’t expect a Oscar nominated script from this one, because you ain’t gonna get one. Don’t expect “Mayhem” to change the world or hold some significant hold on the genre, because that ain’t happening either. This is a movie that you throw your feet up on the recliner for and just enjoy.

All the performances in this movie range from good to ridiculous-but-in-a-good-way. There is very little, if anything at all, that is meant to be taken literally or seriously in this movie. People kill each other in highly gruesome fashions, people run around naked, people don weapons of all types. None of it is meant to be taken out of context, it’s all crazy cool, hilarious fun. I do really like Yuen here, and I think he’s going to have a fine career moving forward. I also really liked Samara’s work in the film. We have seen these archetypes to hell and back, but they make the most out of them. Most genre fans may compare this to “The Belko Experiment,” and they would somewhat be right. I think “Mayhem” is different enough that it stands apart. But there are some striking similarities and it’s kind a “Armageddon-Deep Imapct-1998” thing. But I think its worth seeing, it’s a hell of a lot of fun!

FINAL GRADE: B
Posted by Shawn Hoelscher at 9:39 PM