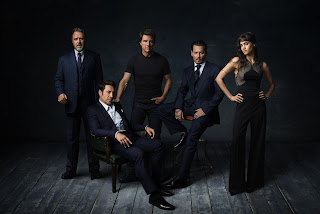 Somebody should find the photographer and his original photo from above. Then take it and keep in a special place for fifty or so years. It'll probably be worth some money.

Before it even got a chance to pick up anything resembling steam, Universal's "Dark Universe" may have suffered a permanant steak to the heart. The franchise's two main producers, Alex Kurtzman and Chris Morgan, have abandoned the franchise and planning to move onto completely different projects.

So is the project dead? Not exactly. Apparently, Universal is playing with some ideas to keep the franchise alive. They are looking into finding new writers and producers to keep the franchise alive, but they are also thinking about creating a bunch of one-off movies, but these one-offs won't be connected to a larger story. It's no surprise that Jason Blum of Blumhouse Pictures is in the mix to get those one-offs off the ground. As of right now, "Bride of Frankenstein," which was to be the next chapter in the Dark Universe, has been put on hold and right now Universal is trying to formulate a plan for moving forward.

Honestly, I can't say I am surprised by any of this. "The Mummy" had disappointing ticket sales, and I am honestly shocked that Universal was surprised by it. A shared universe of Universal's classic monsters doesn't exactly jazz lots of people up, especially people in my demographic, simply because they don't get the iconography of it. Myself and many people my age weren't alive during the big classic monster surge, and had the movie emphasized what made that era special, perhaps they would have been more successful in their efforts. The other big mistake was making these superheroic action movies. They should have stayed deep in the arena of horror, once again emphasizing what makes these iconic characters great. Not everything has to be a Marvel universe to work, it's all about understanding your iconography.

I think the idea had potential, which makes this hurt a bit. Johnny Depp as The Invisible Man and Javier Bardem as The Frankenstein Monster and Angelina Jolie as his Bride would all be things I would have been interested in seeing. They were also circling around The Rock, Scarlet Johansson and Channing Tatum for roles in the franchise. This could have been something special, but it was managed and created poorly and they were fighting an uphill battle releasing this idea in a market that was so unfamiliar with these characters.

This is the second time Universal's tried this (remember that "Dracula" movie with Luke Evans? That was supposed to kick-start a Universal Monster franchise, but for some reason, didn't pan out. There was some talk that Luke Evans would be Dracula for The Dark Universe, but that never panned out either for equally mysterious reasons.) and that is all evidence that Universal either doesn't know what they are doing or is hiring the wrong people. They need to pick one, focus on what's not working, and move forward perfecting what works and fix what doesn't.

For right now, I don't know if we'll set foot in the Dark Universe again, it's looking rather...well...dark.