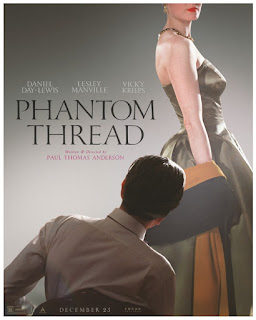 I can't believe that Daniel Day-Lewis is honestly planning to retire from acting. But as I try to process this revelation, I can rest easy knowing that his last film will be with Paul Thomas Anderson directing the charge. The last time  P.T. Anderson and Daniel Day-Lewis worked together, we got "There Will Be Blood," one of the absolute best films of the 2000's. P.T. Anderson is one of my favorite working filmmakers. Always in a flux of constant motion, always pushing himself as an artist.

"Phantom Thread" is about Reynolds Woodcock, who will be played by Day- Lewis. He was a high society clothing designer who lived in London during the 1950's. Telling from the trailer, it looks like it will be somewhat of a romance between Woodcock and Johanna, which inspired parts of his career. The way P.T. Anderson makes his movies though, you can bet that this won't be your typical romanti film.


I'll be looking forward to this!
Posted by Shawn Hoelscher at 10:01 PM