Chifilmfest Review: Was "Before Summer Ends" really a French "Hangover?" 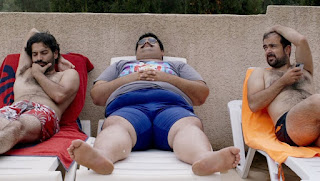 When I was reading synopsis’ for the films I was planning to see for this festival, one in particular caught my eye. “Before Summer Ends” is a French film that was described as a French-Iranian “Hangover.” There are three friends who decide to travel around southern France before the summer ends and one goes back to Iran to study. How could I pass up a film that is described as a French-Iranian version of “The Hangover?”

Personally, I wouldn’t describe the film as any type of version of Todd Phillips modern comedic masterpiece. Sure, it’s a movie about a guy trip. Sure, it’s a comedy and it did make me laugh. But it’s far away from style, tone and mood for “The Hangover” that trying to compare the two almost feels like comparing apples to oranges. “Before Summer Ends” is nowhere near as outrageous as “The Hangover” was. But you what? Good. There is such a rush to make everything just like everything else, it’s almost like everyone is afraid of originality these days. There is such a need for the nostalgia factor, even for things that really aren’t that old, that it amazes me that we can really internalize anything. I like that this was something different than what was expected.

For starters, this is apparently a documentary. Arash is really Arash, Ashkan is really Ashkan and Hossein is really Hossein. They really go on a huge vacation across sunny France before the summer really ends, and Arash goes back to school. They swim, they eat good food, they meet a group of girls and try and charm them. Not in a harassing or gross way, but in a charming, innocent way. This really something you could take your family to if it weren’t for all the subtitles. The men talk about the weather, the stars, their dreams, their desires, their lives and how much they’ve changed. When the girls go on their way, they talk about what they could have done better in order to charm them.

I think no matter if you are a girl or a boy, you can find this film relatable, and I think since we are watching three real friends having a vacation, it’s even more relatable. Growing up, I had some the same conversations with my guy friends about girls we liked, how we tried to swoon our crushes and what we could have done better. I have never discussed nicknames for the three different types of farts like Arash, Ashkan and Hossein do here, but I am sure I said something similar. These are such identifiable behaviors, and there is nothing like that special bond with your close friends, people you’ve known forever. There is a special bond with life-long friends of the same sex that is a different but vital type of closeness you can’t get with a significant other.

There is plenty to laugh at here, but it’s nothing outrageous. “Before Summer Ends” was nothing like I thought it would be, but I was happy about that. It’s fun making a documentary that isn’t revolving around a serious subject, not that those bigger, more important documentaries aren’t important, but there is so much you can learn about culture and human experience from a movie like “Before Summer Ends” that I couldn’t help but love it as much as I did. I’d keep an eye out for this one folks, even though I have no idea when mainstream audiences will get a look at it. This may be a foreign language title, but the thoughts, ideas and themes are universal.

FINAL GRADE: A
Posted by Shawn Hoelscher at 8:29 AM