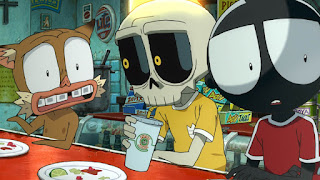 It’s Sunday evening, I am way behind on all the Chicago Film Fest coverage I have planned. I had a busy weekend, a weekend that kept me away from my computer, and through it all, I am starting to notice that there are films that have really stuck with me from the festival, and which have not. There is a film that I haven’t been able to shake, ever since I saw it on Thursday night. It’s been stuck in my head, taking up all my thinking space inside. I can’t seem to get it out of my head. It’s something I never would have expected, something that would never come close to playing anywhere in our shores. I am completely smitten over this film, a film called “Mutafukaz.”

Yep, that’s the title. Even though it’s got a clever spelling, it says exactly what you think it says. The movie is called “Mutafukaz.” It’s a French Japanese anime that was adapted from a French manga comic series. The guy who wrote the comic series, known as Run, also co-directed this film. It’s absolutely nothing like anything you will ever see. It’s an avalanche of rich animation, delirious situations, and the some of the craziest original characters ever to appear on screen. It takes place in a world sort of like our own, and at the same time, nothing like our own.

The film revolves around a guy named Angelino, someone who may or may not be human. He has exaggerated features, like you sometimes see with anime films. He has jet black skin, no hair, eyes that cover over half his face, absolutely nothing like this world. He has a roommate who has a flaming skull for head. Yes, he’s just like Ghost Rider, except his skull is always aflame, and he has no superpowers. They also hang out with a talking cat that I can only describe as Meowth with braces. Yes, he’s essentially a Pokemon with a Latino accent. What’s funny too is that literally every single other character in the movie is a human. When he meets Angelino and his gang, he’s just another faceless pizza delivery guy living in Dark Meat City (yes, I shit you not, that is the name of the city, a parody of Los Angeles.). While delivering one days, he catches the eyes of a girl. The girl, he thinks. His eyes are so glued to this angel that he gets into a car accident.

Soon after his accident, this shady government group is suddenly after him. Not only can Angelino and his gang elude this group, who is armed to teeth, Angelino can actually fight. He doesn’t take karate classes, there is no evidence of him fighting before the film starts. He suddenly knows how to fight. His accident awoke something inside of him. Not only can he fight at a moment’s notice, but when he see’s certain people’s shadows, he doesn’t see a regular human shadow, but something else, something monstrous, something hidden. When the Chicago International Film Festival staff introduced this movie before the screening, they said that Run was heavily influenced by the horror film “They Live.” That is made abundantly clear in this movie. There are humans that have something else hiding in their skin, and those monsters are somehow connected to Angelino and how he grew up. The opening scene to the film is a showdown between a woman who hides baby Angelino in a garbage dump and some government agents wanting the baby. Angelino is connected also to this government group. But how and why?

It may sound to some that “Mutafukaz” is just a grab bag of ideas that we’ve seen in movies before. But there are plenty of twists and turns in this movie. There are plenty of violent stand-offs and big laughs to enjoy in this film. The speaking script almost feels like dialogue Quentin Tarantino would write. Even though we’ve seen lots of these ideas play out countless times in the motion pictures before, run finds ways to make them feel fresh, he fleshes his characters out so that their actions feel urgent. There are a couple twists and turns here, and it’s all fun all the way across.

Not to mention, it’s a great…great audience movie. This is something you take a group of friends with, this is something you put on for a living room full of people. There were tons of people in the auditorium with me when this premiered, and it was absolute bliss being in a theater full of people having the same chemical rush as you are. People were laughing, hooting and hollering all film long and it made the experience even more enjoyable.

What’s most important though, is how mesmerizing it is to just sit down and watch this movie play out. It’s a big, fun, contact-high of a movie. A movie that is filled to the brim with things that will make you smile, make you laugh and just thrill you to the core. I still have closing night this Thursday, but as of right now, “Mutafukaz” is my favorite film I saw at the festival. Not only that, but its easily one of the highlights of the year for me. There is just nothing like it that has been released this year.

I have no idea if and when the rest of America will get a chance to see this. That is why I want to make my enthusiasm for this film clear. “Mutafukaz” is brilliantly blended cocktail of all your favorite liquors all in one drink. Somehow, the bartender made it all taste delicious while also making it look pretty. No easy feat that. I hope there is some kind of outlet that will allow everybody to see this, because it deserves to be scene. There is no better adrenaline rush that I have had all year, and I don’t think I’ve had this much fun at theater this year than this.

FINAL GRADE: A+
Posted by Shawn Hoelscher at 3:36 PM