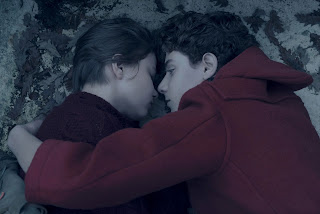 Before “Sicilian Ghost Story” began, the director Antonio Piazza introduced the film. He said that this was a true story that took place on the island of Sicily of Italy in 1996. It was such a painful story, something that stuck with Piazza and his co-director Fabio Grassadonia that they felt they needed to make it. They sat on telling this story for many years. It now felt like the time to tell this story that rattled many people for years.

“Sicilian Ghost Story” is about Giuseppe (Gaetano Fernandez) and Luna (Julia Jedlikowska), two teenagers who are the budding of puberty, and noticing that they are falling for each other. It’s very innocent romance, carefully brought to life with tender care and nurturing affect. It’s sweet acting by Fernandez and Jedlikowska. Giuseppe is a rich privileged kid, but he’s not the type of rich snob that we see in movies about kids. There is an undoubtedly strong sweetness to him and he is drawn to Luna as much as she is drawn to him. Much is seen from Luna’s perspective, she stalks him, she is curious about him, and he handles her advances with lots of sincerity.

Then one day, Giuseppe disappears. He is gone for a few days from school, and Luna just figures that he is sick. Then he’s gone for weeks, then a month and she begins to sense that something is wrong. She tries going to his house, and his family is very pushy about keeping her out. This bright kid is gone, and it seems like nobody cares. This feels unusual just from an American perspective. We all know that if a rich, privileged kid vanished it would be all over the news, but not in Sicily. There’s a reason for that. Giuseppe’s father has connected to the mafia, and he’s beginning to talk to the police. So, Giuseppe was taken by the mafia until his father stops talking to the police.

Luna’s feelings are incredibly strong, Giuseppe isn’t just some fling, she is very much into him. So, she tries to look for him, makes lost fliers, pushes her school to do more, even begins to do some investigation herself. But the village keeps quiet. In Sicily, one out of three or four people you walk past is either part of the mafia, or know someone is part of the mafia. The roots of one of the world’s oldest organized crime groups has its roots very deep on the island. But that doesn’t stop Luna from looking for him, and even in captivity, it doesn’t stop Giuseppe from thinking about Luna too.

The film is so mesmerizing to watch because the two young leads are so good at what they do. Jedlikowska is very strong as a young actress. She drives the whole movie, she is in front of the camera for most of the film and in scene after scene, she delivers the goods. She has great chemistry with Sabine Timoteo, who plays her mother. Luna’s mother believes that Luna needs to forget about Giuseppe and focus on school. Jedlikowska also has equally great chemistry with Vincenzo Amato, who plays her father, who is lot more laid back compared to Luna’s mother. The film is rich with powerful performances.

What’s also interesting about the film is how its structured. The film is a lot more experimental that I would have anticipated. If you are familiar with the recent work by Terrance Malick, there were several moments in the movie that felt very Malick-y in set up and pay off. It’s so noticeable that it kind of through me off a couple times. Feeling distracting. I don’t know how a feel about a film about the fate of a teenager, and a girl desperate to find him should feel arty or beautiful in any way. Granted, lots of the movie deals in Luna and Giuseppe dreaming of being with each other. But the line between dream and reality begins to blur, and throws the storyline off every once in a while.

“Sicilian Crime Story” is still a powerful mystery film. It’s something that I can never imagine being remade in America. The content in the film is a little too dark and too stark for the American market, I can just tell. This is a story that goes all the way, and it doesn’t tie a happy ending to the film. American movies are so quick to tack a happy ending to a movie, no matter what the subject matter. Not here. The movie plays grounded and real, when the movie isn’t busy dreaming that is.

FINAL GRADE: B+
Posted by Shawn Hoelscher at 8:59 AM