Chifilmfest Review: "The Line" is another great gangster movie. 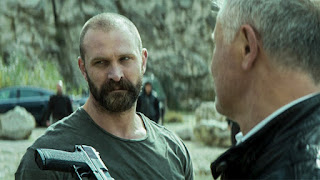 One of my favorite genres of film is gangster movies. I have always been fascinated by these greedy, money-hungry men and (sometimes) women who were growing up with nothing and refused to deal with the hand life dealt them. For a group of people who mostly had a sixth-grade education, the amount of illegal dealings and schemes they got away with over the years, and who some still get away with to this day, is quite frankly remarkable.

“The Line” from Slovakia is a different kind of gangster movie. It focuses on an organization which is a lot less glamorous compared to the Italian-American mafia that has been canonized in our popular culture, to hell and back at this point. A Slovak criminal could be sitting next to you at a bar or at a restaurant, and you’d have no idea who they were affiliated with. This film in particular focuses on a group of criminals smuggling contraband from Ukraine, across the Schengen Area and into the greater European Union. I myself, had to do some research on the Schengen Area, apparently it’s an agreement between twenty-six European nations that have abolished passport and all other types of border control at their mutual borders, it’s used as international traveling purposes.

The movie focuses on Adam Krajnak (Tomas Mastalir) who is very good at smuggling things across the Schengen Area, though he primarily focuses on people and especially cigarettes. He has created a good life for him, his wife, and his daughters. He has a tight crew full of family members and close friends, and they have been successful together. “The Line” is pretty much the day in the life of Adam’s business, right before Ukraine joined up with the rest of the Schengen Area. We follow some mistakes with shipments that get him in trouble with his boss Krull (Stanislav Boklan). Adam’s close friend and associate wants to start shipping drugs across the Schengen Area in order to make more money to bail his son out of prison. But Adam refuses because of the risk involved in drugs. On top of it all, Adam’s eighteen-year-old daughter is pregnant with her boyfriend.

Tomas Mastalir looks like a villain’s henchmen you’d find in a Jason Statham movie, but I have to say that he was incredible here as Adam. Bringing real depth and awesomeness to his role. “The Line” has a little of everything. There is some very tense moments and scenes that will have you on the edge of your seat. There is a jet-black sense of humor, and the movie forces some bitter laughs out of its audience. The film’s rugged cinematography only adds to the mood of this gritty yet highly entertaining movie.

“The Line” is a very formulaic movie, it moves in the exact same motions as most other gangster movies. But sometimes, formula works and I think “The Line” is a great little crime thriller. It kept my eyes glued to the screen and on the edge of my seat. I can ask for anything more from my crime thrillers.

"The Line" was submitted to the Academy by Slovakia for consideration for next years Oscar Awards. Here's to hoping they get nominated.

FINAL GRADE: A
Posted by Shawn Hoelscher at 8:41 PM