Chifilmfest Review: Friday night gets some spooky laughs with "Creep 2" 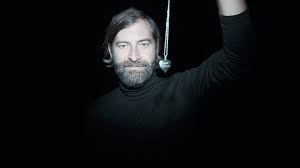 I saw the original "Creep" on Netflix back in 2015. You can read my original review here. For anyone whose never heard of it, a guy named Josef (Mark Duplass) puts an ad in the paper for a videographer, an ad that is answered by Aaron (Patrick Brice, who also wrote the script with Duplass and directed the film). Josef tells Aaron that his girlfriend is pregnant with his child, but that he is quickly dying of cancer, so he wants Aaron to make a series of videos for his child to remember him by. As Aaron further hangs out with Josef over the course of the day, it becomes clear that Josef isn't who he says he is, and perhaps Aaron is danger. It's a movie that walks the thin line between comedy and scary. Mark Duplass is pretty well known for his comedic career, you know from FX's "The League" and starring in films like "Tammy," "Your Sister's Sister," "Safety Not Guaranteed" and "Greenberg." But there is a slight dark side to some of his work. You can see it in "The One I Love,"
and his recent HBO anthology show "Room 104."

Three years later, Patrick Brice and Mark Duplass are back for “Creep 2.” With all sequels, there is always a scare that it will just be more of the same. Especially when it comes to found footage movies, there is always a strive to just do what came before. The thing is, I think Brice and Duplass figured we’d expect the same thing again too. The film opens with a guy named Dave (Karan Soni) getting a box in the mail. It’s the signature box Aaron from the first film got from Josef. A disc that says “play me” with a stuffed wolf. When Dave puts the disc in, sure enough its full of weird images. He calls his friend over, and sure it enough the friend he calls is Mark Duplass. He pretends to be put-off and scared by the video and the box, and while Dave goes off to get them beers, Mark is already motioning and smiling at the camera. Soon after, he admits his true intentions and cuts Dave’s throat open. It’s a hilarious and striking scene, and it set the stage for the film to come. I was ready for anything.

Then we meet Sara (Desiree Akhavan), a host for a YouTube series that focuses on people putting strange ads on Craigslist, then hunting them down and meeting them. She has made nine episodes of the show, and has only received nine views of the show overall. She doesn’t know what to do, how to make the show better. Her only option seems to be find better ads, then she stumbles upon an interestingly vague ad which promises $1000 for one day of video making. Apparently, somebody needs help with a video and that’s basically all she gets. She accepts and goes to the guy’s house. It’s the exact same house from the first “Creep” movie, but this time Josef is going by Aaron.

Things start to get strange right away. Aaron right away begins to try to scare Sara. But Sara isn’t going to be the typical damsel in distress. Sara is a thick-skinned, tough-as-nails chick, not the typical girl that we meet in horror movies. Honestly, I loved that about the character. She’s a tough videographer, even if she’s internally freaking out by some of the things Aaron is doing. Aaron is also not just doing the same thing he did in the first film. This time, he makes it crystal clear that he is a serial killer. We get another glimpse of the final minutes of the first film as proof. He lets Sara know that he has been killing people for a long time, and that he wants to make one final death video, his own. That’s right, Aaron is ready to die himself and he wants Sara to catch it. How can she resist? She’ll get $1000 for it and its perfect fodder for the show, he’s not really going to kill himself, right? She’s not putting herself in any danger, right? Well, just in case, she has a knife hiding in her boot.

So, “Creep 2” doesn’t exactly tread water, and I certainly appreciate that they took this sequel down a different route. Sure, there are some callbacks from the first film, but most sequels feature those. There is a small line between repeating yourself and using those callbacks to illuminate the new ideas in your sequel. I would say without a doubt that “Creep 2” does the later. Consider a scene when Aaron tries twice to jump out and scare Sara, and neither attempt work to scare her. Aaron also pulls out the infamous Peach-Fuzz mask out and wears to drive to their recording destination. She never feels scared, Aaron sees Sara as a challenge and it’s amazing how their relationship molds by her actions, and how they bounce off of each other. Sara isn’t the same type of victim as Older Aaron was, she is something different entirely.

What was slightly disappointing about this sequel is how it’s more laughs than scares. What was so amazing about the first film is how it gleefully navigated between laugh moments and scary moments. The movie did a good job creating both and never felt like bad transitions. In “Creep 2,” there are very few scare moments. This is more comedy than anything else, and the scares that are set up are punctuated with a comedic punchline. I’d barely call this movie a horror film, wouldn’t go anywhere near classifying this as one, which is too bad, because the first film was good at both. Fans of the first film should be warned that there are very few scares in this sequel, if any at all.

I can tell you that Mark Duplass does an amazing job slipping back into this role. He is, no pun intended, super creepy in this role and he brings a certain level of complexity to the role. I think Desiree Akhavan is a welcome addition to the film, and she does a good job re-creating the type of character we see in movies like this. Any time you try to call what is going to happen in this movie, there is a surprise for you right around the corner. I love that Sara is almost a perfect foil to Aaron, in nearly every way. She does outstanding work here.

Overall, I will say “Creep 2” is a cool movie, I will tell you that it’s a fun movie. I don’t think it completely approves upon the first film, but I suppose technically very few sequels do. I will continue to warn that if you are expecting that walks the line between funny and scary, “Creep 2” does not do that in any way, shape or form. This is a comedy, plain and simple. It doesn’t tread water, like so many sequels do. There is a juicy ending that I think has the potential to set up a magnificently crazy third part, if Brice and Duplass have a third film in them. But this really isn’t scary, it doesn’t come close to creating the creepy atmosphere the first film did. This is merely a funny movie.

"Creep 2" will be available on Video-On-Demand on October 24th. It should hit Netflix sometime soon too.

FINAL GRADE; B-
Posted by Shawn Hoelscher at 6:36 PM