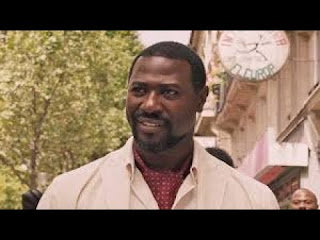 Charles is his name, and street hustling is his game.

But Charles walks the downtown Paris streets, dressed to the nines is suave attire, not hustling prostitution or drugs or other contraband. No, he gets people excited for a salon that has recruited him and a handful of other street hustlers. The salon hires street hustlers to get people to go to the salon. Charles, played by Jacky Ido, is one of the very best in the business, and he makes several of the other hustlers envious, some admire him, others will do anything to weaken his street cred. All Charles wants to do is make enough money to buy the barbershop of a friend who wants to retire.
This is the story of “Chateau,” a dramatic comedy from France. This is a colorful, stylish film that packs an unexpected punch. There are many laughs throughout the movie, but it’s got a heart that never feels sappy, nor does it ever force you to roll your eyes. No easy task that is, and this film makes it all look effortless.

Jacky Ido is great as Charles. Now, you probably know who Jacky Ido is, whether you realize it or not. Did you ever see Quentin Tarantino’s “Inglorious Basterds?” Do you remember Marcel? He was Shoshanna’s boyfriend, who lit the celluloid on fire with his cigarette that set Shoshanna’s movie theater on fire and killed hundreds of Nazis? That’s Jacky Ido. He dishes a revelatory performance, commanding the screen with ease. He’s joined by a great ensemble cast, full of French actors I will be putting on my radar. Jean-Baptiste Anoumon is laugh-out-loud funny as Moussa, Tatiana Rojo is charming as Fatou, Ahmed Zirek is delightfully evil as Mourat. The film is rich in performance, and it only elevates the material.

The film doesn’t revolutionize a genre. It doesn’t transcend movies as we know it. This is a small little movie. It’s one of those slice-of-life films that focuses on a group of people on a random few days in their lives. There are moments that will make you laugh and moments that will make you think. Sure, the movie kind of comes together nicely and puts a happy bow on top of it, but that’s the movies for you. “Chateau” is a little on the formulaic side, but there is plenty here for everyone to enjoy.

FINAL GRADE: B
Posted by Shawn Hoelscher at 9:36 PM