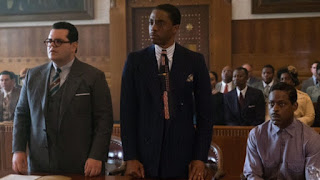 I got off work at 5:15 on Thursday night. I proceeded to run to my car, start it up and drive like a bat out of hell to get to downtown Chicago. Thankfully, I work far up north so that drive wasn’t if it would be on any other night, but traffic was heavy. My GPS switched routes at least three times, but I still got into town well before the opening night screening of “Marshall.” Once I got to the AMC on Illinois street, the theater was already decorated for the festival. I have been going to this theater a few times this year for early screenings, thanks to my membership with CIFF, but I’ve never seen it this appealing before. After I picked up my tickets, I saw a crowd of people gathered in the corner, it was the press line. The Wakandan Prince himself, Mr. Chadwick “Black Panther” Boseman was already talking to the press, “This is Us’’’ Sterling K. Brown was also there.

Once I made into the auditorium, they were a little behind schedule, that gave me time to look through my pamphlet I was given. I guess the actors were taking a longer time than expected through the press line, I didn’t care. I was happy just to be there on time throughout all that crazy traffic. A member of CIFF came out, and we saw a huge trailer of a nice handful of films that will playing at this year’s festival. It was too cool, made me wish I could duplicate myself like X-Men’s Multiple Man, just so I could see everything. Shortly after the trailer, “Marshall’s” director Reginal Hudlin introduced the actors on site, they said thanks for coming, then it was on to the show!

Marshall tells the true story of a case by Thurgood Marshall, played by Boseman. Thurgood Marshall was a lawyer for the NAACP, who started making a name for himself right around the time World War II was heating up. He would represent African-Americans who were wrongfully accused of crimes and prove their innocence, which was easier said than done during the time. The film focuses on a case which took place Connecticut, when wealthy socialite Eleanor Strubing (Kate Hudson) accused her chauffer Joseph Spell (Sterling K. Brown) of raping her and nearly killing her. Spell claims he is innocent, and Marshall represents him in case.

Or so he tries to, NAACP pairs Marshall with Sam Friedman (Josh Gad), who normally doesn’t do crime hearings, he’s an insurance lawyer. His brother pushed him to take the job because of what it would mean for their firm. The problem is, due to the racism of the time, Friedman was forced to take center stage at the court case. The judge did not allow Marshall to ask questions, pick the jury, he basically just sat at case and at the meetings. Completely unable to act as Spell’s lawyer, leaving an untested Friedman the lawyer of Spell’s case. The team worked around it, Marshall remained the brain of the team, Friedman became the mouthpiece.

Which illuminates the biggest flaw of the film for me. I don’t think the film should have titled “Marshall,” it should have been called “Marshall and Freidman.” Truth be told, the movie doesn’t really focus on Marshall exclusively, it’s really about the bond and eventual friendship that develops between Marshall and Friedman, and how together, they proved Spell’s innocence. People going to see this shouldn’t expect a full blown biographical film based on Thurgood. In fact, what’s slightly disappointing is how Marshall feels like a secondary character in a movie that bears his name. In Spell’s case, Marshall didn’t even stay for the final verdict, he was asked by the NAACP to represent another case duo to the organization’s time constraints. There is a sub-plot about Marshall and his wife struggling to get pregnant that is poorly, poorly developed. It seemed like the movie was more interested in how Friedman was able to step up to a particular challenge then about Thurgood Marshall himself, and that feels problematic due to the film’s title. I mean Thurgood Marshall was the first African-American to enter Supreme Court Justice, a huge achievement, but that fact is only touched on in a title card at the end of the film.

It’s a good thing everything else about the works so well. The chemistry between both Boseman and Gad is the super-glue that holds this film together. I liked that Thurgood Marshall wasn’t the typical hero of these types of movies. When racists challenged him in this movie, he wasn’t afraid to challenge back. There is a wittiness, a clever slyness to Thurgood’s character. I don’t know if that is how the real Thurgood was like, but it made for an entertaining movie. This is a performance that I think will stick with Boseman as he moves on in his career, a profound highlight of his talents. It’s an equally strong showcase for Gad. Sterling K. Brown is getting really good at playing somber individuals, and he delivers the goods here once again. Kate Hudson is somebody who is fifty-fifty on whether or not she’ll give a good performance. She doesn’t have lots of screen time here, but she does what she was asked to do, and she does it well.

There are thousands and thousands of movies where a white person and a black person had to come together to face a racial challenge in our country. There are thousands and thousands of movies about African-American figures in our history overcoming obsticles in the 1930’s through the 1960’s, when prejudice was really running rampant. Those movies have developed a group of tropes, and we’ve come to expect them in each of these movies. What’s clever about “Marshall” is how it sets up those familiar tropes, but then shatters them in some instances. It doesn’t happen in every scene, but I think audiences will be surprised by just how many times the film doesn’t “play by the rules.”

There was a Q&A after the film, and I think a comment that Josh Gad made was a near perfect summation of movies today. There is a lot of gritty movies getting released, lots of dark movies, lots of cynical movies. Heck, fans get worked up when superhero movies are too light or too funny, nevermind that comic books have been geared towards kids and teenagers since their inception. We are living in cynical times, and “Marshall” is a movie about hope. A movie that reminds us that no matter how good or bad times get, we are in this together and we can do anything if we stand united. There may have been a darker, sadder version of Thurgood Marshall, but I don’t need that version. “Marshall” is a very hopeful movie, and it was that grounded, yet optimistic viewpoint that ultimately won me over. There is lots of like about this movie, I just wish was given a title that better represented what audiences can expect from it.

I made lots of Facebook live videos of the event on Thursday, so if you are interested in seeing them, please drop me a line and I will invite you to see my Facebook page.

Thursday night was “Marshall’s” official premiere. It is now playing at cinemas.