Chifilmfest Review: "Charleston" is a different kind of black comedy. 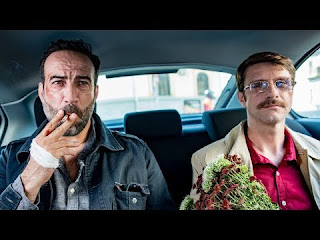 If I asked how one would feel if they lost their significant other, I don’t think anyone in their right mind could answer that question. I don’t think there could be any type of words to be found by such a forbidden question. To add to such a morbid topic, what would you do if you lost your significant other, then one day your doorbell rings and the lover of their dead significant other is at your door? “Charleston” is a black comedy and drama film, telling the story of how a widower comes face-to-face with his dead wife’s lover. We meet Alexandru (Serban Pavlu), who recently lost his wife. When a man named Sebastian (Radu Iacoban) shows up at his home, saying that he was his dead wife’s lover, Alexandru’s first reaction is to punch Sebastian in the face. Why would this guy come over? What is Sebastian’s game plan, his motive, his goal?

Sebastian only wants to talk to Alexandru, to get to know each other. But Alexandru in his misery, wants nothing to do with him. This guy had sex with his wife, for crying out loud. Some more punches are thrown. Then eventually, Alexandru lets his guard down. The two men sit down together, they share cigarettes, they share drinks, they go to a bar, and they begin to sit back and listen to each other. Sebastian wants Alexandru to help him overcome his grief over the loss of his wife. A tall order to ask a husband who had no clue his wife was running around on him. The thing is, it was Alexandru’s wife who initiated the affair. Sebastian is a shy, introverted young man, and it was Alexandru’s wife who got him interested. They had an affair for five months, and the whole time, Sebastian did not know she was married.

The movie at its core is about a special kind of loneliness. Eventually the two men grow to enjoy each other’s company. On the night Sebastian comes to visit Alexandru, Alexandru is drunk and alone on his forty-second birthday. As he gets to know Sebastian, we learn that Sebastian lives with his uncle, his parents are dead, he doesn’t have many friends, and Alexandru’s wife offered a bond of togetherness that Sebastian desperately needed at the night. Had he known he had the potential to be a homewrecker, he would have never gone for it. Alexandru is stern and hard on Sebastian, and that may be more because of his grief than anything else. But he pretends like everything is okay and that he doesn’t need anyone. But we are human beings, we need human connection of some kind just to function. We are social animals, whether its family or friends or significant others are a little bit of all three, we need people in our lives. If Alexandru just decides to stay isolated, he will drink himself to death.

While the film is very funny, it leans carefully but heavily on the idea of loneliness and how it works as a sickness in the moments of our greatest despair. But despite that, there are several funny moments in the film. Whether it’s Alexandru taking Sebastian to a lunch with his dead wife’s parents. Whether it’s a scene involving Alexandru and Sebastian dancing to one of the dead wife’s favorite songs. Whether a scene where the two men go and try to buy more food and wine, only to end up stealing it because they are out of money. There are several moments of hilarity in the film, moments that will grant you an honest chuckle. There is a good balance between the funny and the dramatic, and the film features one of the most apocalyptic stand-offs between two characters, as these two broken men begin to discuss why Sebastain came to Alexandru in the first place. It’s surprisingly profound how much these characters tackle over the course of this movie.

The film is rich in performance. There lots of fun music moments. The script is tight and full of fun in nearly every corner. But it has something very honest and heartfelt at its center. I was shocked by just how much the film affected me.

FINAL GRADE: A
Posted by Shawn Hoelscher at 9:14 PM