After fifth grade was over for me, one of the first big blockbusters of the summer I saw was Tomb Raider with Angelina Jolie. I didn't know much about the games, except I had this weird attraction to an animated avatar that I am still a little embarrassed by. But other than that, I can't tell you much about the games. I have never played them. Heck, I've never watched somebody play them. I didn't know what to expect when I was a dawning sixth grader, but when I originally saw the first "Tomb Raider" movie, I thought it was cool. I didn't think anything much beyond that. As I got older, I saw more and more how dumb the movie was. I never gave the sequel a try. Well, maybe I gave the first twenty or so minutes a try, then shut the movie off. There are not too many movies out there that I stopped watching after a few minutes. So I hope that says something.

Because I have no connection to the games, I can't tell you how excited I am for the "Tomb Raider" reboot. The poster is below. We get our first trailer tomorrow. We will see how good it is. I like Alicia Vikander quite a bit. That's the soul reason why I will at least give this movie a try. She's done some very good work, she allows herself to be challenged and she's anything but cookie-cutter. So perhaps she add some needed depth and pizazz to the role. We shall see. 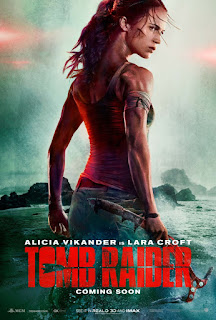 Well, she at least looks the part well.

I can't say I will be excited or not until I see the trailer tomorrow. We'll be back then to discuss it. Until then...goodnight.
Posted by Shawn Hoelscher at 10:00 PM