Review: The "Kingsman" series continues to bend expectations with "The Golden Circle" 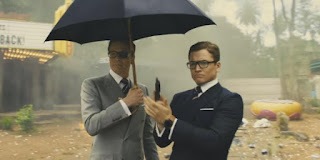 It’s a real magic trick for a director to make a film with every emotion you’d find in an “important” drama film but also mixing in all the bombastic fun you’d expect from a typical blockbuster. In just a seven short years, Matthew Vaughn has gone from Guy Richie’s favorite producer to a fully-formed stylized director. This might be kind of mean to say, but I think Matthew Vaughn is the guy Zak Snyder wishes he was. Vaughn has a unique stylish eye, and watching his films kind of feels like you being transported to a different genre completely. Even though most of his directorial work so far has been comic book adaptations. “Kick-Ass,” and “X-Men: First Class” and “Kingsman: The Secret Service” are all films I like quite a bit, and while I have enjoyed Bryan Singer’s return to the “X-Men” franchise, I kind of wish Vaughn kept making “X-Men” movies.

“Kingsman: The Golden Circle” is a rare satisfying sequel. A movie that wastes no time reacquainting itself with the past characters. And honestly, I like that this sequel feels like a true continuation of the events that happened last film, instead of a new adventure entirely. Eggsy (Taron Edgerton) is settling into his role as Galahad after the death of his mentor Harry (Colin Firth) in the first film. Charlie (Edward Holcroft), the bully recruit from the first film didn’t die, and returns as a secondary antagonist towards Eggsy. Tilda of Sweden, played by Hanna Alstrom who Eggsy had anal sex with after saving the world in the first film is now his girlfriend. It feels like natural, progressing storytelling to not just drop important people or places or ideas in a sequel. Believe it or not, that happens often. I like that everything keeps moving in real time here.

The first “Kingsman” film was a pretty clever reaction to the James Bond series and even the modern era Jason Bourne movies, it was almost otherworldly how gleefully that movie destroyed expectations while also playing by the rules of the genre. “Kingsman: The Golden Circle” continues that fun tradition of being a quasi-parody of the popular spy movie series’. The Kingsman are being hunted by a Poppy Adams (Julianne Moore) a vicious drug cartel leader who has a deep affection for 1950’s and 1960’s iconography. Turns out she has some big plans for the world and she’s willing to go from drug dealer to outright terrorist to put these plans in motion. The members of the Kingsman organization are systematically hunted down, leaving only Eggsy and Merlin (Mark Strong) left, the organization’s “doomsday protocol” means trekking to the United States of America to join forces with the American branch of Kingsman, known as The Statesmen. Together, resources are put together in order to bring Poppy Adams down before she poses too much of a threat to world peace. Oh, and did I mention that she has singer Elton John prisoner or leverage? Did I also mention that it’s one of Elton John’s finest presentence’s ever in anything?

One of the resources is Harry, who apparently never died in the first film. The reason being something kind of clever and funny. Colin Firth continues to defy expectations according to his greater career. Who knew he could be such a big badass. Edgerton does some really good work here again as Eggsy and I think he’s off to a bigger, brighter career from here, he’s the real deal folks. Unfortunately, the film sidelines some of the more interesting new characters. If you are expecting big things from Channing Tatum, Jeff Bridges and Halle Berry, then it is time to rewire your expectations a bit. They were game to play in this world, and when they are all onscreen, they do outstanding work, but they aren’t given a whole lot to do.  I wish we could have seen more of all three of them, but they make their time in front of the camera worthwhile. What I was surprised about though, is that Mark Strong has much more to do as Merlin this time around. He was mostly the all-purpose Q character in the first film. This time around, he is actually a field agent and he does some amazing work. He’s written completely different in this sequel, almost an entirely new character. I have to say that it nearly killed me when Merlin shows up in his last scene in the movie, it’s the strongest content in any movie that Mark Strong has created so far, and it further reminds me why I love him as a performer so much.

Let’s talk a little about Julianne Moore, because holy crap! Who knew that Julianne Moore could so…so…deranged. If you can imagine an older Harley Quinn outside the DC Universe, that’s Poppy Adams. She’s a character who is very happy to do some very ugly things, whether to punish her henchmen or to protect herself from her enemies. We’ve seen Julianne Moore play hateful bitches before. We’ve seen her do some pretty astounding dramatic work before. But I assure you, we have never seen her do anything close to what she does as Poppy Adams before. That I can guarantee you. I only wish they gave her a better villainous plot. I find it interesting that both of these movies feature some morally gray villains, but the overall reasoning behind Poppy Adams’ plot is kind of a letdown.

Despite the strong character work and the further fun of this weird spy universe, “Kingsman: The Golden Circle” does suffer from some slight “sequel pains.” What do I mean by that? Well, there are several scenes, particularly in the first half of the film, where it feels the filmmakers are playing a game. There are several tongue-in-cheek references to the first movie. It feels like the film stops for these footnotes. “Hey, remember this scene from the first film?” “Hey, remember that scene from the first film?” There is quite a bit of that in the first half, and I admit, it really slows the first half down. There are some people complaining about the long running time of this film, and you definitely feel that long running time.

With that said, there is so much fun to be had here that’s hard to stick the film with some grimy nitpicks. I want a third film (especially since there is a rumor that Matthew Vaughn wants The Rock to be the villain in a potential third film.) Not only that though, I want new “Kingsman” movie every few years. Much like the James Bond series, I want “Kingsman” movies for the next fifty years. As long Matthew Vaughn continues to entertain the hell out of us, I will be in line to buy tickets to this series. I mean, Jesus, the final half hour to forty-five minutes of this movie is a big bombastic climax that will have you ranting and raving on your way out of the theater. “Kingsman: The Golden Circle” is so much fun, and worthy sequel that all seems so scarce these days.

FINAL GRADE: B+
Posted by Shawn Hoelscher at 9:58 PM