A Reflection on the 2017 Movie Season 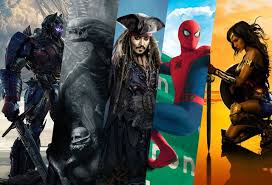 Sure, if the only movies you saw this summer were "Alien: Covenant," "Baywatch," "The Mummy," "All Eyez On Me," "Rough Night," "Girl's Trip," "Snatched," "47 Meters Down," "The Emoji Movie," "The Dark Tower" and "Transformers 5" (something I personally admit that I skipped in the theater by choice. I will catch up with it when it hits redbox machines. But spending movie theater dollars on it? Sorry. Not happening anymore.) Then yes, okay, it was a bad year for summer movies. But that's not all that came out. Nowhere close. It feels crazy being so enthusiastic about the summer season we are now ending. Perhaps because I saw more movies this summer than I did the last few summers. Perhaps there were better selections to choose from in the theater this summer. Or maybe the output was just better this summer. Plain and simple. That's what I would argue.

I mean 2017 gave us "Guardians of the Galaxy Vol. 2," "Dunkirk" "Wonder Woman," "Spider-Man: Homecoming," "War of the Planet of the Apes,"  and "Baby Driver." Those were all amazing blockbuster movies. Heck, I'd even add the latest "Pirates of the Carribbean" to that list. I know not everybody liked it, but I sure did. These proved that the mainstream can still shoot fireworks in a summer movie season. If you felt jaded by blockbusters, the independent cinema was also on fire this season. As both "Wind River" and "The Big Sick" proved to pull over fans at a rapid pace. Or if you didn't want to go to the theater at all, you could stay home, turn on your Netflix app and watch "Okja" or "What Happened To Monday?" Both of those worthy of your time and attention. You had options this summer, not only that, but you had endless worthy options. Which is something you don't always get in a summer movie season.

I may not have been over-the-moon crazy for "Cars 3" or "Despicable Me 3" or "It Comes At Night" or "Valerian and the City of A Thousand Planets" or "Detroit." But hey, those movies added to the flavor that made summer 2017 a keeper. Yes, some of those movies worked better than others, so grouping those together may sound silly. But what I am trying to say is each of the movies listed here are movies that left something good. They were either ambitious or just trying too hard to be flat out entertaining. I didn't leave the auditorium for those movies with a wholly negative feeling in my head. Too many movies in the last few summers were just product. So when a mainstream movie is trying hard to differentiate itself from the rest of the herd, it leaves me thinking about it. Which is a good sign if you ask me.

The last movie I saw this summer was "Logan Lucky," a movie I really enjoyed. I will write my review for it tomorrow night. I plan to catch up on the seemingly good independent cinema I missed this summer as soon as I can. Movies like "A Ghost Story," and "Good Time," and "The Glass Castle" and "Ingrid Goes West" all look very good, I just haven't had a chance to see them yet. I plan to catch up on those as soon as the opportunity presents itself, and I hope I enjoy them all.

You can argue about box office slump and the low numbers from early summer. But its pretty clear to me as the summer warmed up, it definitely got better. It seemed like, no matter if we got a mainstream or arthouse release, the filmmakers behind those movies were aiming high. I can only hope as we enter into the fall season, we see the same artists in Hollywood aiming as high as they did during this summer. This is the type of summer movie season I hope for each and every year it comes around. I will say that I am excited for the fall season coming up. It looks like we have some good potential films to look forward to. Also, my first film festival. I am going, I just am still having trouble believing.

I hope you had as much fun at the movies this summer that I did. After two slow summers, this good one was a welcome.
Posted by Shawn Hoelscher at 9:05 PM