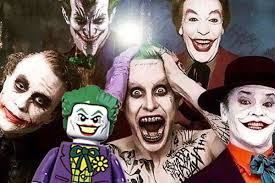 So The WB is working on some superhero spin-off movies. Movies that will not be connected in any way, shape or form to the DCEU that they are also creating right now, strange right.

Well, when I originally read that, I was a little baffled. What's the point of make these spin-offs if they don't take place in the universe they are creating. I can already see people getting wildly confused by all of this, but hey, it won't be my problem. As I was ready to laugh off this idea, I read more into it. Appears that we are going to get a Joker origin story. This is going to be produced by none other than Martin Scorsese. Yep, you have read that right. Yes, check your calendar, we far, FAR off from April. Martin Scorsese is producing an origin movie about The Joker. This movie will be co-written and directed by "The Hangover's" Todd Phillips.

My mind is having a hard time processing this.

So I wonder what type of movie we will get. Alan Moore wrote a fairly detailed Joker "origin." (I put origin in quotes because The Joker later says that he wants to remember his life as a multiple choice question.) in "The Killing Joke," which was adapted into an animated feature last year. While the movie was subpar, the comic book was pretty freaking great, but that's because Alan Moore is one of the best comics writers ever. Most of Joker's origins have revolved around a Red Hood gang, a man who fellow into a vat of chemicals which transformed him into the Joker. Like many comic books characters, his origin has been retooled many times over the years. Its even been pretty mysterious in some times too. So this will be interesting to see.

I have read that the movie will be set in the 1980's and will be a gritty crime movie set in Gotham. As of right now, there are no other details besides Scorsese and Todd Phillips attached. "8 Mile's" screenwriter Scott Silver will co-write with Phillips.