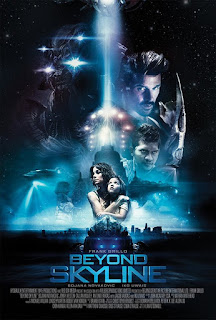 Did you see the movie "Skyline?" Don't remember? Don't worry! It was one of the absolute worst movies of 2010. It was a fantasy movie that didn't set up any type of rules, and made up things as it went along. It was a thrilling space invasion that had no thrillers. It featured characters that weren't likable. Its not a movie I would have expected to get a sequel, as it seemed to come and vanish without a trace the month it was released. I had to look up the film's box office. I was equally baffled that "Skyline" had a $10-20 million budget and made over $78 million at the box office. While not a total box office scorcher, I figured the film wouldn't have broke even. No matter what though, the movie was highly unpopular when it came out.

Its not a movie I would have ever expected to get a sequel, but somehow it is. This sequel stars Frank Grillo and Iko Uwais, so some major asskickers are starring in this. But I beg to wonder, is that enough? Sure, the sequel looks wildly different from the first film. But does that mean its worth making? Does that mean it will make it better? Nobody cared about this movie it seemed like, so why even attempt a sequel? Its an odd thing to turn into a brand in the new age of filmmaking. I wonder if it will stick


Posted by Shawn Hoelscher at 9:26 PM