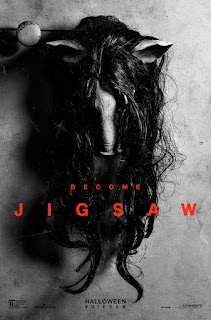 The "Saw" franchise is returning this October with "Jigsaw."

Does anybody honestly care?

You can say what you want about the "Paranormal Activity" franchise but one thing I will always love about that franchise is that it killed "Saw." I loved the first "Saw" movie, simply because it was a slasher film on a level we'd never seen before. The sequels are more of the same. The series eventually just amounts to a contest of how the filmmakers can gross out the audience. How many clever ways can a film crew come up with killing people. None of that is particularly interesting without some substance or character development, so I never ended up caring about the series. There is a certain horror fan that loves the gore, the violence and the interesting killings. And the other horror fans like to actually feel scared.

I suppose now that the "Paranormal Activity" series is (apparently) done, I suppose Lionsgate thought it was a good time to revive their piggy bank franchise and see how much more money they can squeeze out of this. The thing is, did many people miss the "Saw" franchise. I don't hear people screaming for more "Saw" movies over the years. I didn't hear anybody cry when they stopped making them, so is there still an audience for this franchise?

I don't get the appeal. I must have missed something. But whether I am ready or not, "Jigsaw" is coming this October.

Posted by Shawn Hoelscher at 8:50 PM