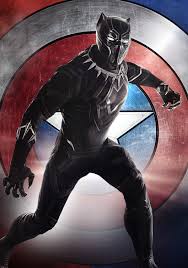 The first trailer for "Black Panther" is here! The solo adventure film featuring the superhero who first appeared in "Captain America: Civil War" last year. This film is significant not only because we are seeing this popular hero for the first time in his own adventure, but it will be the first African American superhero in a long time to have his own film. Sure, there was "Spawn" in 1997. I actually do like that film quite a bit. Yes, it has cheesy special effects, even though it was the 1990's. Yes, the script has some serious issues, but I still do enjoy the film. I guess the others people in the world didn't think the same thing. The film unfortunately didn't catapult Michael Jai White into superstardom, which I think they were trying to set up. But I will always enjoy it. Then there was "Steel" and "Blankman" before that, and well, I think we know how those turned out.

I think Marvel will be a little bit more successful in their efforts. For one, people clearly liked the character in "Civil War," so that will get people in line to buy tickets. Chadwick Bosemen hit a homerun playing the character last year, and we will be anticipating what he will do in his own adventure. Also, Marvel has earned enough clout that people are interested in anything that features the company name. That's what you want when creating a massive franchise like this.

The trailer opens with Everett K. Ross (Martin Freeman), who we also met in "Civil War" last year interrogating Ulysses Klaue (Andy Serkis) who we met in "Avengers: Age of Ultron." It seems like Wakanda, Black Panther's home, is a mystery to many people. Some people can't even locate itself on the map. It hides in the cover of being a third world country, but Wakanda is anything but. This is a highly technologically advanced society and the visuals of Wakanda is fantastic. Its not a particularly long trailer, but it sets up a struggle between Klaue and Black Panther. We see some glimpses of Erik Kilmonger, played by Michael B. Jordan, who will also be a villain in the movie. We see a couple scenes of Danai Gurira in action, and "Walking Dead" fans will love seeing that.

Overall, good trailer. Let me know what you think.


Posted by Shawn Hoelscher at 8:05 PM