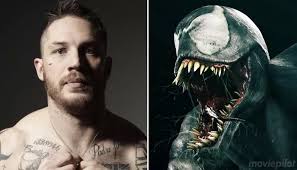 For a few years now, there has been a plan for a stand alone "Venom" movie. There have been several false-starts, several months in development hell, and it seemed to be one of those projects we'd never ever see. Especially since the Spider-Man movies have been in many different hands...oh...just within the last decade. I just figured a stand alone Venom movie would never happen.

Well, its really beginning to happen now. There have been whispers for many months that Sony would be developing a stand alone "Venom" movie. They have a director set to direct, and it is in their plan. Now, it feels even more official, now that Tom Hardy has been cast in the lead role. There is no word if Tom Hardy would be playing Eddie Brock or several of the other different men who have taken up the symbiote suit over the years in the comics. But we do know that Tom Hardy is the lead.

Now, you are probably thinking, "HELL YEAH TOM HARDY AND TOM HOLLAND!" But sadly, while Marvel and Sony are sharing Spider-Man for the character in the MCU. Sony though, has their own plans for Venom, and for right now, they have no plans to include this Venom in the MCU. So it will be interesting if anything, to see how this "Venom" movie plays out.

Hardy though will be a good fit for Venom. He's certainly got the build for Venom and he absolutely has the talent to do anything he wants. I will be curious to see what route this movie plans to take. Normally, Venom is a villain, he began life as a villain anyway. In some cases, in the comics, Venom has ended up as an anti-hero. I suppose that may be the route they take for the movie. But we'll see. I wonder if they plan to include much as far as Spider-Man mythology in the movie. Only because the web-slinger is so immersed in the MCU right now.