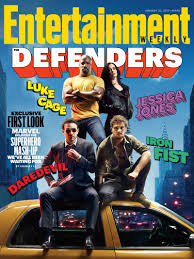 Ever since "Daredevil" hit the scene in 2015, Netflix bingers have been slowly but surely slipping into another corner of the Marvel Cinematic Universe. A corner that's less light, a grittier, darker corner. Just like there was a build-up to the Avengers, and Iron Man, Captain America, Hulk and Thor got their own movies. They eventually teamed up in "The Avengers." Netflix has put that to the test again, with their own line-up of Marvel heroes. Daredevil, Luke Cage, Jessica Jones, and Iron Fist have all been leading us to the next big team-up. This August, that team-up will come to fruition.

Much like the Disney movies, the Netflix Marvel shows have done a good job on building an unrelenting amount of anticipation, so I know already its going to be big deal seeing these four heroes on the small screen together. Throw in Elektra from "Daredevil" season two and Signourney Weaver as the show's villain and you've got lots to get excited about. Telling from the first trailer, its going to have many similar parallels to the Avenger movies, lots of mistrust at the beginning, tension, big build-up, but I think that will eventually pay off in a big way.

You may have noticed that's been over a month and I haven't reviewed "Iron Fist." I honestly haven't finished it. Its my least favorite of the Netflix Marvel shows and it just doesn't have the same pace as the previous shows do. No matter. "The Incredible Hulk" was an unpopular movie and The Hulk ended up being a stand-out in both Avenger movies. Just because Iron Fist had a bad introduction, doesn't mean I don't want to see him or see this mini-series. This could still work, and I bet it will work well. So I am not worried.

I was already looking forward to this summer, now I am even more excited for it.


Posted by Shawn Hoelscher at 7:57 PM