The Dark Universe is upon us...

The next big film franchise (potentially, I might add) is upon us, and it begins with "The Mummy," coming to theaters real soon. The name of this franchise is called Dark Universe. It is the official name of the new shared universe that Universal Pictures is creating with its classic monsters.

Yep, I have written about this a couple of times now, and I am just so amazed that this thing is happening. I am not sure if that is a good amazement or a bad amazement, I am just simply amazed. I would have never guessed that we'd ever see a shared universe of films revolving around the Universal classic monsters. I suppose I shouldn't be surprised at all though. This is the new Hollywood model of money-making. Its been in effect since the new millennium began. When "X-Men" made money in 2000, and when "Spider-Man" made money in 2002, everybody needed to make a superhero movie. It didn't seem to matter if they were good or not, everything got greenlit, hoping to be the next big money machine. When "Lord of the Rings" brought in box office dollars for three straight years, every studio needed a fantasy novel to adapt. And now, in 2017, after the success Disney has had with the Marvel Cinematic Universe, and (even to a much less degree) the success Warner Brothers has had with the DC Extended Universe, I imagine studios are rummaging through their franchises, desperate for the next big shared universe franchise. 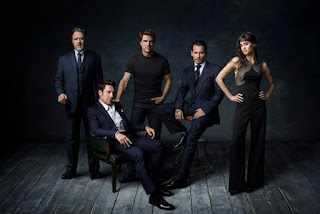 We know Tom Cruise, Sofia Botella and Russell Crowe are in "The Mummy." We know that Russell Crowe is playing Dr. Jekyll in the film. It is also starting to sound like Tom Cruise is going to be involved in this franchise for the near future as well. There have been rumors running rampant around this shared universe, and we got some confirmation on those rumors. It has been made official that Johnny Depp will portray The Invisible Man and Javier Bardem will portray The Frankenstein Monster. It sounds like The Frankenstein Monster will make his debut in The Dark Universe in "Bride of Frankenstein" due in 2019. Then there is a solo Invisible Man movie for the future, as well as solo Wolfman and Creature From The Black Lagoon movies coming too. Though as of right now, we don't know who will be portraying those monsters (Though its been rumored that The Rock is attached to be The Wolfman.) These will, of course, all share continuity together.

It will be interesting to see "The Mummy" solely because I don't know what genre I'd put it in quite yet. I am not sure if this will be in the same vein as Steven Sommers 1999 blockbuster. Which, in my opinion, one of the best blockbusters of all time. There isn't a moment or a detail of that Sommers movie that I don't love. What I liked most about it is how it blended action-adventure, humor and yes, even horror. Not one genre overwhelmed the other, which is insanely hard to do. I don't think the new "Mummy" will be like that. Telling from the marketing I've seen for the film so far, this looks like it will commit to its seriousness. That this Dark Universe maybe a straight-up horror franchise. That would be pretty interesting to see too.

The only thing I get hung up on is the point of this shared universe. Is there some kind of endgame for this franchise? Or will it be all build-up with no payoff? Will it simply be a series of reboots where Dr. Jekyll and The Wolfman star in a movie together? If that's it, then is that really something exciting? Will this franchise be more in the vein of what Marvel and DC are doing? If so, how? Are we going to get a movie where Dracula, The Mummy, The Wolfman, The Invisible Man, The Lagoon Creature and both Frankenstein creations are standing arm and arm, united against...Van Helsing? I see the potential dollars in a shared universe, but its got to lead somewhere, or else what's the point?

That will end up being the supreme trap when and if these other studios start cranking out shared universes. I don't think its gonna be enough to simply say "HEY, CHARACTER A FROM OUR ARSENAL IS MEETING UP WITH CHARACTER B IN A SHARED UNIVERSE!" Its got to be in the service of telling a story. There is no evidence so far that I've seen of telling a grander story within this shared universe. That worries me, because I don't know if its going to be exciting to simply have an Invisible Man movie where Dracula drops by. If there is a plan to bring all these characters together, what will be the purpose? I am having trouble imagining how this will come together and be exciting. I have hope, like always. I want this to be special, and I want it to be something cool.