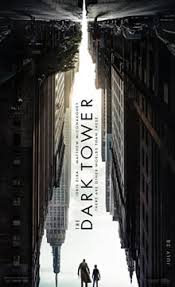 I've been watching it for almost forty-eight hours now, and I can honestly say there are things I like and some heavy reservations I carry. I know, its not a straight adaptation, its a continuation of the books, a quasi-sequel of what happened to Roland after the events of the books. Okay, I get it. But even though that's the case, if you are adapting a story, the movie or TV show has to feel like that story.  "The Dark Tower" books are not like much of Stephen King's other work. Its a surreal western, with suspense tropes thrown in, which weirdly connects all of Stephen King's previous work into one multiverse, heck Stephen King was a character in the book. Its a strange, strange work, but its some of his best work.

What's evident in the trailer is that this version of "The Dark Tower" is not some kind of surrealist, supernatural western. This is just another lame action movie, tipping things so far into black-and-white that it doesn't feel like Stephen King's work at all. Its a typical, superheroic, save-the-world type storyline. That couldn't be more generic given the landscape of cinema we happen to be living in right now. As far as this adaptation is concerned, it is a woefully lazy take on one of the best series' in the history of literature. When I see The Man In Black (Matthew McConaughey) stopping glass with his mind, I just wanted to laugh. This isn't supposed to be "The Matrix" or "X-Men." The Man In Black is a far better villain than that. Plus, with so much of the trailer's focus on Jake, I wonder if Roland is going to get side-stepped in his own story.

I mean, sure. There is some cool stuff. There are images in the trailer that come right out of my dreams of this adaptation. I also love that this movie is trying to connect to Stephen King's other works, just like the books did. Did any of you notice that Jake was in a rundown circus with the word Pennywise written on it? Will Bill Skarsgaard suit up for this after he's done with "IT?" There is also a picture of a hotel that looks exactly like The Overlook Hotel from Stanley Kubrick's "The Shining'' from 1980. That's awesome, that's something that has always been essential. So I like seeing that, and I think curiosity will ultimately make me go see this in a theater. Sadly, just not much else is jazzing me up for this. Not the feeling I wanted, because I've been waiting most of my life to see this come to life. After "Lord of the Rings," "Harry Potter," "Chronicles of Narnia," and "The Hunger Games," this is the last great fantasy epic that needs proper silver-screen adaptation, and it looks like they are butchering it.

I do believe some things are unfilmable. I think there are some things in literature that can only exist in literature. I would put Alan Moore's "Watchmen" in that category. Sure, Zak Snyder got some things right, but his adaptation is by-and-large a disappointment. Perhaps Stephen King's "The Dark Tower" is unfilmable also. I will keep my fingers crossed, I will remember that this is the first initial trailer. Hopefully, this turns out great.


Posted by Shawn Hoelscher at 7:41 PM