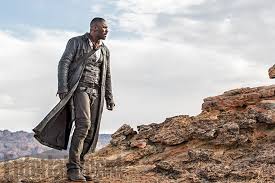 I wonder if they even improve the selling of a motion picture and how much marketing money they cost?

There is a world from the epic land of fantasy literature that we have not seen yet, and that is Midworld. The fictional lands of Stephen King and his Dark Tower novels. The books that bind all of his other work together, connecting it like a comic book multiverse. It is a world that I have wanted to see on the big screen for as long as I can remember, and now, pretty soon, that wait will be over. There is a certain look that I think King illustrates really well with words, and it separates his fictional world from others. Adapting that world and making it look different will be the bending or breaking point for these movies. I mean, just look what Peter Jackson did with Middle Earth.

There are small moments in the footage that I really liked. Moments that felt very Stephen King's Dark Tower-ish. But the whole slow motion bullet reload with Roland (Idris Elba) was hilarious. Nearly vomit- inducing. King's Dark Tower series blended a bunch of different genres together, and he was careful and clever in the way he brought so many different genres together to tell his story. It really set you up for what you imagined this world would look like. I certainly didn't imagine Zack Snyder slow motion in the gun fights. In fact, it would be a mistake to turn this into an action series at all. That's not really what "The Dark Tower" was and I am going to be supremely disappointing if Elba and Matthew McConaughey just run around fighting each other for a few hours.

But hey, that's my hang up. I know this isn't a straight up adaptation. Its a continuation from the books. So I guess we'll see where that leads.


Posted by Shawn Hoelscher at 9:24 PM