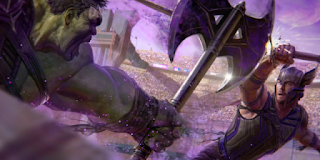 I have talked about him before, but I really love the director Taika Waititi. Last year, one of the best films of last year was a film he directed. A highly original comedy called "The Hunt For The Wilderpeople." It worked so well because there was nothing else like it that came out last year, something I find more rare as the world moves along. Before "The Hunt For The Wilderpeople," Taika Waititi directed "What We Do In The Shadows." A mockumentary about vampires that is even more original than it sounds. Its awesome when you think you've seen the last creative stroke with vampires but then somebody else comes along and blows your mind with them. After these two movies, its become abundantly clear that Taika Waititi is in the same group as Wes Anderson and Woody Allen. Waititi has a comedic style of its own, it can't be compared to anybody else. Someone who is one in a million.

There is some of that Waititi humor in the new teaser trailer for "Thor: Ragnarok." When Thor is narrating the beginning of the trailer, the use of language in the scene, its such a Waititi move. I can't wait to see his signature in every scene in this movie. It looks like its on full display in this entire trailer.

I am wildly curious about this movie. I mean it revolves around the Norse mythology event of the end of the world. Their book of Revelation. But its a comedy? There is a dash of "World War Hulk" in the movie. They are introducing Hela (Cate Blanchett) and Valkyrie(Tessa Thompson). How will they fit into this? We know Doctor Strange will make an appearance in it. We know Thanos' presents is somehow involved in this. All sorts of other characters from Thor mythology will be introduced. And, what is going on with Loki who has assumed the identity of Odin in the last film. There is enough content in this movie for a nine-hour mini-series. Will Taika Waititi pull it off? Will the movie feel complete with all these moving parts?

I sure hope so. But so far, this looks awesome.


Posted by Shawn Hoelscher at 7:15 PM