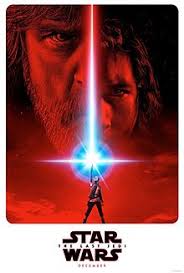 What was your favorite part of the weekend? Mine was definitely seeing the first glorious trailer for the eighth episode in the "Star Wars" franchise, "Star Wars: The Last Jedi!"

I probably watched the trailer about a thousand times. I also love the retro style poster you see above. If I had to guess, telling from both the trailer and the poster, these three new entries in the "Star Wars" saga are going to be a Uncles (Luke Skywalker) vs. Nephew (Kylo Ren) story. Again, that is just a guess. Perhaps it will be more about our new characters and their journey. Whatever the case may be, I am super excited.

It looks like we will learn more about what happened to Ben Solo before he became Kylo Ren, what led him to influenced by the Dark Side of the Force, we get some close shots of Rey, Finn and Poe seemingly in peril. We know Laura Dern and Benicio Del Toro are in this, but we have no idea who they are. We don't see them in the trailer. And of course, what's a "Star Wars" trailer with no flying speeders, space battles and some lightsabers. The only thing that worries me, Luke Skywalker says "the Jedi must end" or something along those lines. I can't believe. Will we never see the Jedi again? I guess that's why they call it what it is.


Posted by Shawn Hoelscher at 8:00 PM