Review: "Going In Style" rides on the performances of its actors 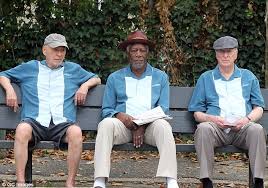 "Going In Style" is a remake. It stars Morgan Freeman, Alan Arkin and Michael Caine. I think looking at those three names alone, well your interest may already be pretty high. These guys aren't just actors, they will go down as legends of their era. Easily some of the finest performers of their generation. Perfectly able to do anything they wanted to with a fair amount of ease. These guys could read a telephone book in Swahili and it wouldn't be boring. No matter how bad a movie is that these three guys appear in, you can pretty much guarantee that their work in said movie won't be bad.

That is kind of the gift and curse of "Going in Style." The work done by Freeman, Arkin and Caine is strong, but it almost feels like the movie leans on it like a crutch. There isn't much left to offer than watching these three royal men have some much needed fun late in their careers. Don't get me wrong, "Going In Style" is immense fun, its certainly not a boring time at the theater. There just really isn't much to it other than watching some actors having a good time on screen.

I think there are some themes the filmmakers are trying to push. Caine's character is trying to provide a good life for his growing granddaughter, but he is close to losing his house and is feeling the pressure from his bank. Freeman's character has some severe health issues, and if he doesn't get an organ transplant fast, his days are sourly numbered. And Arkin's character, well he's just kind of lonely, and needs some much needed stress relief. Its Caine's character that feels like they should rob a bank. All three guys need fast cash, and they think that since the bank has been ripping people off for years and they should be tired of it. There are themes of facing death, of feeling young again in your old age, and of finding and loving what is really important. But let's be honest, these themes aren't investigated or illuminated in any enriching way. This movie really just boils down to how many times Freeman, Arkin, Caine and their silly antics can makes us laugh.

The thing is, by and large, these guys pull it off. We know just how much charisma just one of these guys carries in a movie, so imagine between the three of them. "Going In Style" is a charisma machine. This is very light, very slight entertainment. But I suppose it gets the job done.