I loved "Guardians of the Galaxy"

One of the biggest appeals of the first film was Star-Lord's mix tape. He got picked up in the late 1980's and he's been living in outer space ever since. He doesn't have the same ear for music that the rest of us do. He has a knack for the classics. Much like Eli from "The Book of Eli," he treats his mix tape with care, its the last memento of his deceased mother, and he holds this mix tape dear. Just as will hold this second mix tape dear in this second film. I can only anticipate. I bought the "mix tape" the summer of 2014 after I had seen the movie, and I have listened to Star-Lord's mix tape several times over the years, I love it!

I belong to a Marvel Cinematic Universe Facebook group, having discussions that go this way and that about the MCU. One of my favorite conversations that I was apart of a couple years ago was trying to guess which songs would end up being on the second tape given to him by his mother. Now, we know what to expect to hear in the movie which hits theaters in the next couple of weeks. 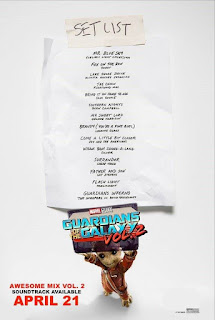 This sequel already officially rules due to the inclusion of Cat Stevens.

Other than that, its a healthy mix of classic songs I like with stuff I can't wait to discover!

Posted by Shawn Hoelscher at 8:22 PM