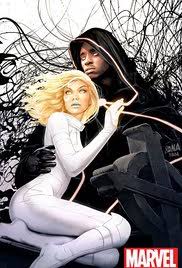 Whether its in movies or TV, just about every hero in the Marvel Universe is under one banner and even though they haven't mingled with each other yet, we know that they all occupy the same world. I have enjoyed ABC's "Agents of S.H.I.E.L.D." I kinda liked "Agent Carter," but I can see why it got axed after two seasons. I have been a huge fan of all Netflix Marvel, except for "Iron Fist" which I may get around to writing about soon. (Haven't a clue when, still need to finish that.). Overall, the TV side of this universe has been nearly on par with the movie side.

Adding to the ever expanding world is Cloak and Dagger, two heroes who got their powers from experimental street drugs. Marvel maybe scrapping at the bottom of the barrel for characters now, but Cloak and Dagger are very cool characters, and if they are treated with the same passion as the other characters, this will be a worthwhile presentation.

I do get a little scared about the idea of this being on Freeform, AKA ABC Family. Not really the outlet you'd expect from an MCU show. I hope this doesn't end up being to Tweenie for me. That will be a massive miscalculation and misstep for this continuing franchise. Fingers crossed that this doesn't happen. Based on the trailer, it could go both ways.


Posted by Shawn Hoelscher at 8:42 PM