The first trailer for Stephen King's "IT" remake 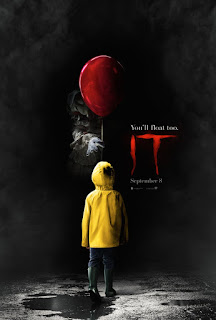 Well, its finally here. The first look at a horror film that I've been waiting for all year now. We are still a ways off before its release, but this two and a half minute trailer will have to do for now. I am an avid Stephen King fan, the first author that I really obsessed over and watching so many of his works get adapted to screen over the years, I was starting to think his work was un-filmable. Sure, "The Shawshank Redemption" and "Stand By Me" and "The Green Mile," those are all good. They are also not the typical horror stories King writes. When you look at his horror novels and the host of movies and TV shows based off of them, the great, good and even mediocre adaptations are far and in between. I was beginning to think that much of King horror work was un-adaptable. I get it though, King doesn't write conventional horror. His writings are disturbing, demented and you may want to vomit at times. King is who he is because he steps over the line so many of us would never dare cross, and that makes his horror work difficult to adapt.

Telling from this first trailer for "IT," it seems like director Andres Muschietti was a big fan of the epic, original novel. The atmosphere of Derry seems fully intact, even though I will admit that the cinematography is a little too slick for my tastes. (Give us a gritty horror film, goddammit!) But overall, the mood seems right there. Even though he's updated a few things, (the kids story took place in the 1950's in the book and their adult story in the 1980's. For this movie, the kids story will take place in the late 1980's and the adult story will take place now) it still seems in the spirit of King's novel. It looks like we will get a good coming-of-age story along with this absolute horror, which is the way to go with "IT."

Now, about Pennywise. Lots of people  think Tim Curry's iconic portrayal won't be topped. Lots of people think that the moments in the trailer are too jumpy. Well, all I can say is, let's wait and see. I am glad this trailer doesn't give too much away about Pennywise and his character. I think also that they are trying to make the movie bankable to the average horror fan. Sadly, much of the horror landscape these days are built on "boo-scares" and cheap thrills. I hope Muschietti can find a happy balance. Plus, the trailer could be edited one way, and end being something else entirely. I would advice us all to take a breath. Let's see how this adaptation goes. I am on board. Its been awhile since I've felt this good about a King adaptation.


Posted by Shawn Hoelscher at 6:36 PM