Following my screening of "T2 Trainspotting" tonight, there was a Q&A with Danny Boyle; the director of the film and Irvine Welsh; the writer of the books which inspired the movies. The Q&A was ran by Chicago based film critic Richard Roeper. I had no idea that these movies were based off of books, but I now maybe inclined to check them out now that I do know. Its interesting that the sequel to the book "Trainspotting" was called "Porno." When asked tonight how they came up with the title for the sequel, director Boyle discussed how he didn't want to just call it "Trainspotting 2." He was inspired by Welsh, so he wanted to call it something else, which was a little less safe. He tried a couple ideas, but the studio was displeased with the notion of not using "Trainspotting" in the title for the sequel. So Boyle had the title changed to "T2 Trainspotting." He said that if the characters Mark, "Sick Boy," Spud and Franco knew they were in a movie, then that movie was followed by a sequel. They would have named their sequel after "Terminator 2," a notion that would have honored and mistreated James Cameron.

I made a video at the Q&A, and I made a couple Facebook Live videos. Though due to poor cell phone reception, those Facebook videos didn't turn out so good. (damn). But the video I made with my video camera turned out just fine, and I posted it on YouTube. I also ebetted here on this blog post. They discuss picking the music for the film. As well as some of the big, funny moments of the film and how they got those moments to work. There is a moment in the film where a character goes to get revenge on the heroes of the film, but first he goes to his house and has a sentimental heart-to-heart with his estranged son. We had no idea that scene was leading to the revenge scene, and the transition floored me. It was amazing what Boyle got away with in making this movie.

After the Q&A, there was some quick time that Boyle and Welsh spent taking photos and giving out autographs. While I didn't get to shake Richard Roeper's hand, I did get to shake Danny Boyle's hand and we shared a quick selfie. I didn't have a lot of time to talk to him because there was some kind of afterparty he had to get to, but I was lucky enough to get a quick photo and tell him how much I have loved his work over the years. He thanked me for coming to the screening. It was cool. 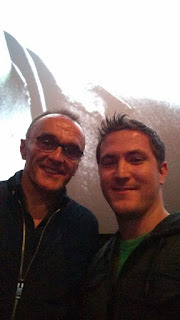 For my Chicago advanced screenings, I try to go live as often as I can. Keep on an eye on my Facebook page and on my Twitter feed to get the most out of these sessions. There is content I get live that I don't get to share with the blog.

Don't know when the next advanced screening in Chicago will be and I don't know what for. But after two of these, I am having a great time!